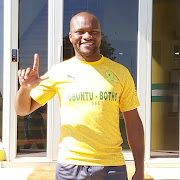 Rantie‚ who was released by Cape Town City coach Benni McCarthy from his contract without kicking a ball in December last year‚ has been training with the Brazilians since their pre-season camp in Nelspruit in July.

Rantie is looking to resurrect a career that has hit the skids due to disciplinary problems and Mosimane said he asked the Sundowns management to give the player an another opportunity as he believes in him.

“We are done with Rantie‚ we assessed him and I like him‚” said Mosimane.

“You must remember that he can sign at anytime because he is a free agent.

"My recommendation to the club was to give him a chance because everybody deserves a second chance.

"The guy has not played for the last two years but he is quality and he was playing in the English Premiership not so long ago.”

Mosimane added that people cannot continue base their view of Rantie on his past mistakes.

“I believe that we can’t hold somebody to what he has done in the past‚" he said.

"We all know that he has had big challenges in the past but somebody has to give a helping hand and probably that somebody is me.

"What if he comes out right‚ we have nothing to lose because we are not buying the player.”