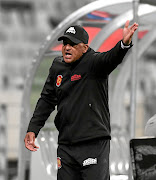 Highlands Park coach Owen da Gama has joined those calling for a new coach to take the helm of Bafana Bafana amid the uncertainty around the future of incumbent Stuart Baxter.

Baxter has found himself on the receiving end of criticism for his tactics, perceived to be defensive by many, at the Africa Cup Nations (Afcon) in Egypt, where SA crashed out at the hands of Nigeria in the quarterfinals last week.

The Highlands mentor, who previously served as Bafana's second in command to Shakes Mashaba, has raised the names of three local coaches, Gavin Hunt, Pitso Mosimane and Steve Komphela, tipping them as suitable candidates to replace Baxter, should he go.

"I am truly hoping we can get somebody [new] into Bafana. I think I'll coach Bafana again, but not now. I must prove myself but there're guys like Gavin, who has proven himself, Pitso can come back, Steve can come back," said Da Gama.

"We need to play our brand of football

"We got to talk as a country... we've to look and say... our game has to be based on our strength, not the way Germany play. I will never criticise any coach, but guys, let's play our own football," said Da Gama.

The well-travelled tactician, who in the past mentored the likes of Orlando Pirates and Platinum Stars among other clubs, furthermore hinted that Bucs ace Thembinkosi Lorch wasn't given enough chance at the Afcon.

"I still believe Lorch could have been the saviour. You people put pressure that Lorch must play and he won a game [referring to his solitary strike against Egpyt in the last 16 that sent SA to the last eight]... the next thing he's substituted after 58 minutes," Da Gama said.

"We need to understand our tsotsi mentality on the pitch. Lorch is a tsotsi.

"He's not a big, strong player. He scores in the last 20 minutes, always, even against us [Highlands]."