No ifs, buts or maybes - Stuart Baxter simply has to get boot 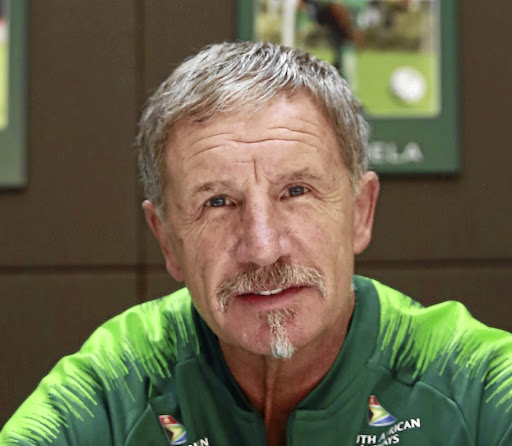 The arrogance-filled tirade that Stuart Baxter spewed upon Bafana Bafana's arrival from the Africa Cup of Nations at the weekend was a strong indication that those who cautioned against his reappointment as national coach were correct all along.

Baxter was first in the country 15 years ago, plunging Bafana to new lows, but Saturday's outburst shows he's learnt little about this country, its football and, more importantly, its sensitivities.

Those of us who were opposed to his return to the national team more than a decade after he left them in a parlous state had hoped he would return more mature and measured in his dealings with the local press and supporters.

But just as in 2005, when he vacated the Bafana post after failing to lead us to the 2006 World Cup in Germany, he continues to project himself as some sort of Messiah doing us a favour by coaching our national team, rather than an employee hired to provide results.

Irate Bafana Bafana coach Stuart Baxter lashed out at the media after he was asked for an explanation for the national team's performance at the ...
Sport
2 years ago

His claim that he's not "desperate" to stay on as coach should have at least led to a demand for immediate explanation from Safa, but such is the spinelessness of that organisation, probably no-one has had a word with the coach.

Yet when Shakes Mashaba made a similarly misguided outburst following Bafana's win over Senegal in Polokwane in 2016, he was suspended within 24 hours.

Baxter, however, has been allowed to have a go at everyone in his bid to shirk accountability when asked about some of Bafana's below-par performances.

His interview with a British newspaper, wherein he appeared to run down the country, was at best condescending, at worst, treasonous.

"There's too much going wrong in the country: electricity shut down every day, the water shortages, the unemployment, you name it. The country's not hopeful and they are in a mental state of depression," Baxter was quoted as saying.

It's perverse that a coach who has held no fewer than four jobs in SA since 2004 (two with the national team, and at Kaizer Chiefs and SuperSport United) sees fit to speak ill of the same country that has enhanced his CV even more than the country of his birth.

On arrival from Egypt on Saturday, where Bafana played five games but only performed in one - thanks to the coach's laborious tactics - Baxter told us he had had contact with potential employers, meaning he could leave Bafana if he wanted. Leaving, however, should no longer be his choice.

His contract runs until after the 2022 World Cup in Qatar, but the possibility of Baxter taking us there - on the evidence of the past two years - looks gloomier now.

He cannot be trusted to atone for two failed World Cup bids that he has already presided over, the last of which was a sorry embarrassment that saw Bafana finish bottom of their group for the first time.

He has to go and must not be allowed to "make a decision after returning from Sweden".

It must not be his call.

In any case, Baxter was not Safa's first choice two years ago in the aftermath of Mashaba's departure.

He should be freed to go work where there's stable "water and electricity", high employment, and not continue to "depress" us even more with his turgid football.

Bafana Bafana pressed Egypt high up the field‚ and cut the supply to wingers Mohamed Salah and "Trézéguet"‚ coach Stuart Baxter has explained of the ...
Sport
2 years ago

Bafana players set to pocket R670,000 each if they beat Nigeria in Afcon showdown

The SA Football Association's (Safa) acting chief executive Russell Paul confirmed the financial carrot on Tuesday and he added that the players ...
Sport
2 years ago
Next Article