Four killed, several injured in crash on N17 near Ermelo 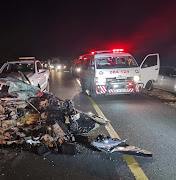 Image: ER24 When paramedics arrived at the scene they found two vehicles that had sustained extensive damage.

Four people died and three others were injured when two cars collided on the N17 between Bethal and Ermelo on Sunday night, paramedics said.

ER24 spokesperson Russel Meiring said when paramedics arrived at the scene at around 7.30pm they found two vehicles that had sustained extensive damage.

The injured patients were transported to hospital.