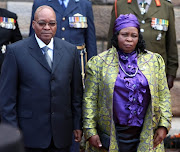 The Jacob Zuma Foundation has refuted claims that former first lady Sizakele Khumalo has passed on.

On Monday morning, rumours surfaced on social media that MaKhumalo had collapsed after the arrest of her husband, Jacob Zuma, and passed away on Monday morning.

The foundation said: "Following media inquiries, the Foundation checked with the family and can confirm that the rumour about first lady MaKhumalo having passed on is devoid of truth. Long Live Mama Wesizwe (mother of the nation)."

The rumours come a day after the passing of Zuma's younger brother Michael. According to Khanya Zuma, a senior member of the Zuma family,  Michael was not well and he passed away on Sunday morning at about 11am. "He has not been well for some time now,”  Khanya said.

Meanwhile, the Constitutional Court is hearing an application by the former president to have its own ruling that sent him to jail, set aside.

This after Zuma was found guilty of contempt of court for repeatedly snubbing a call by the Zondo commission into state capture, chaired by acting chief justice Raymond Zondo, to appear and give evidence before it.