Fewer protests in 2020, but that doesn't mean people are happier

Image: Supplied Protesters in Pomeroy, KZN, dug up a road in September last year as frustrations over water and electricity boiled over. According to Municipal IQ, 2020 saw a nine-year low in service delivery protests.

Though 2020 saw a nine-year low in service delivery protests, much of this can be attributed to lockdown months when public gatherings were outlawed and policing was rigorous to enforce the state of disaster regulations.

The proportion of violent protests fell slightly in 2020 (evident in 75% of cases) against 78% in all years recorded since 2004.

This is according to Municipal IQ, a specialised local government data and intelligence organisation which collects data on service delivery protests staged against municipalities on its “municipal hotspots monitor” to quantify and better understand the ongoing nature and trends behind such events.

“The low figure for 2020 is attributable to a dip from March to August, when the lockdown was most pronounced, and also when service delivery protests often spike,” said Kevin Allan, MD of Municipal IQ.

According to the findings of the report, the decrease in protests is not necessarily an endorsement of local governments.

Gauteng remains the most prominent site of service delivery protests, followed by KwaZulu-Natal and the Western Cape — the same order as in 2019.

“In many instances, the pressure on municipalities in these provinces was a function of a demand for housing and free basic services with community members displaced or compromised by a loss of income,” Heese said.

“Service delivery protests are likely tied to the extent of policing under Covid-19 regulations. It has been seen in previous local government election years — should these continue later in the year — that service delivery protests fall, but there is no guarantee of this trend holding given the rising number of municipalities that find themselves financially and logistically stressed by the pandemic.” 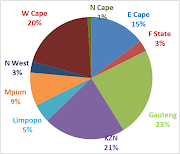 Municipal IQ’s hotspots monitor databases protests staged by community members identified down to particular wards against a municipality, as recorded by the media or other public domain sources such as police press releases.

Such protesters raise issues that are the responsibility or perceived responsibility of local government, such as councillor accountability, the quality and pace of basic service delivery and, in metro areas, housing.

According to the data, these protests may be violently impinging on the freedom of movement or property of others, including the state, or peaceful, but there is a clear dissatisfaction with the management of a municipality.

Not included are issues falling outside local government’s service delivery mandate such as demarcation, industrial relation disputes or clear party political issues such as candidate lists. Where protests are sustained over several days or weeks, these are recorded as a single entry, with qualitative details updated on the database.