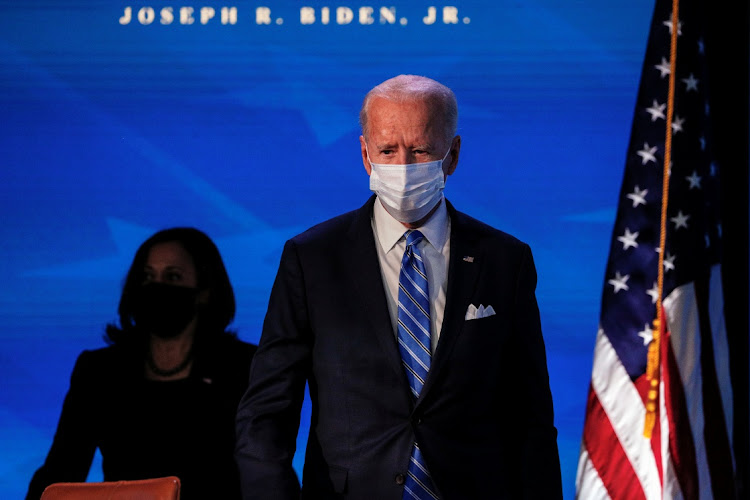 US President-elect Joe Biden reacts while delivering remarks during a televised speech on the current economic and health crises at The Queen Theatre in Wilmington, Delaware, US, January 14, 2021.
Image: TOM BRENNER

A rehearsal for US President-elect Joe Biden's inauguration scheduled for Sunday has been postponed because of security concerns, Politico reported late on Thursday, citing two people with knowledge of the decision.

The rehearsal is now planned for Monday, according to the report.

Biden's team had also cancelled an Amtrak trip from Wilmington to Washington planned for Monday due to heightened security concerns, the report added. Biden will be inaugurated on January 20.

The presidential inaugural committee declined to say on the report.

Federal Bureau of Investigation Director Christopher Wray said earlier that the FBI was looking into individuals who could possibly threaten the safety of the inauguration.

A presidential inauguration traditionally draws hundreds of thousands of visitors to Washington, but the ceremonies have been scaled back dramatically because of the Covid-19 pandemic.

Biden asked his nominee for deputy attorney-general and former President Barack Obama's counter-terrorism adviser, Lisa Monaco, to serve as a temporary homeland security adviser leading up to next week's inauguration.

Officials have warned of plans for armed protests in Washington and all 50 states and activist groups have been concerned about the potential for violence.

The warnings follow last week's assault on the US Capitol by supporters of President Donald Trump that left five people dead.

Trump, who has challenged the validity of Biden's victory without producing evidence, initially praised his supporters but later condemned the violence.

The US House of Representatives impeached President Donald Trump for a second time on Wednesday.
News
1 year ago

As rioters scaled scaffolding outside the U.S. Capitol, Roxanne Mathai held up her cell phone to record the sea of supporters of President Donald ...
News
1 year ago
Next Article