WATCH | 'Depoliticise our board': SABC staff protest amid possible retrenchments

By zama luthuli AND Zama Luthuli

Image: Tyrone Arthur The SABC staff came out in full force on Friday to protest on Friday.

SABC staff members halted work when they protested outside the national broadcaster’s headquarters in Auckland Park, Johannesburg, on Friday.

Staff members took to the streets after it was announced that about 400 employees were served with section 189 notices and facing retrenchment.

The SABC staff members were joined by trade unions, political parties and workers from other corporations who protested in solidarity, including Cell C employees who also protested against retrenchments and corruption.

The workers are calling for the appointment of board members to be depoliticised, and for a change to the funding model for the state broadcaster. 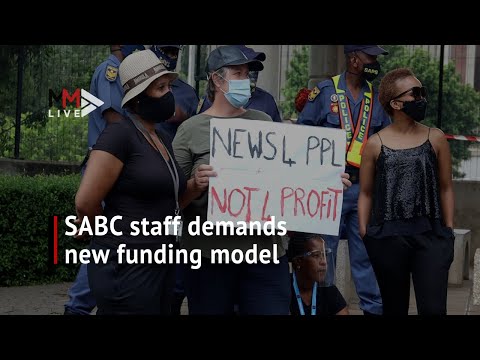 They said it is unreasonable to expect a state broadcaster to adopt a profitable model when its mandate is to serve the people.

"Separate the SABC into two entities, one which is commercial where they are expected to make billions and billions and there you can do as you please," said Sophie Mokoena, SABC foreign editor representing the workers.

"As long as the boards are appointed by politicians, SABC will continuously have this problem".

The SABC board has suspended the retrenchment process at the corporation for seven days.