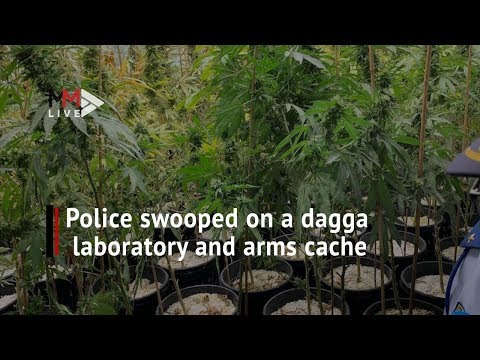 Gauteng police swooped on a home in Wierdapark near Pretoria and discovered an arms cache and "dagga laboratory" inside.

Motsoaledi said the owner of the house, a 50-year-old man, had been arrested after the raid on Tuesday.

Motsoaledi said officers from the Pretoria and Soshanguve K9 unit pounced on the property after getting a tip-off from someone who allegedly used to buy drugs there.

He said upon searching the premises, officers found a dagga laboratory operating “under optimal conditions of production”.

“They widened their search and found hidden rooms in the house. The rooms contained several guns.”

Motsoaledi said the man claimed to be an arms dealer and collector "but investigations had revealed otherwise".

“Some firearms that should have been deactivated as collectors' items were in fact not deactivated.

“It is worrying us, because this man can start a mini war if he wishes. Why do you keep launchers that can shoot helicopters? That is for war.”

“If you are a collector, the arms must be deactivated, but officers found active arms here.”

Motsoaledi said the man's dealership licence had been placed on suspension and his firearm licences would be revoked should he be found guilty.

Why do you keep launchers that can shoot helicopters? That is for war

The house, which appeared to be under construction and was surrounded by an electric fence, is in a quiet suburb. The garden was full of construction materials including wood pallets, scaffolding, plastic pipes and tools.

In the front yard were three trailers and a small boat. At the back of the house were shipping containers full of construction equipment and tools.

Behind the carport was a Russian Lada SUV.

Chemicals and blue drums were found in the living room. The house was packed with boxes, fans, tables and other furnishings, making it difficult to move around.

In one of the rooms was a large dagga crop and several firearms.

Motsoaledi said the amount of dagga was enough to “supply a whole village”.

In a different room were various military items, including uniforms. Motsoaledi said this would form part of the police investigation.

“It is things which soldiers wear when they are in battle, but they still need to be analysed.”

Sitole commended the junior police officers who swooped on the house.

“They have showed a very high level of determination. They could have easily been bribed in this particular operation and they did not accept that.”