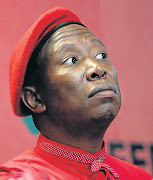 Image: Alaister Russell The EFF is a threat to the ANC's reclaim to power in the Western Cape

The ANC in the Western Cape has identified the EFF as an additional threat to its attempts to reclaim power in the province.

The party says while its own support has been declining‚ the EFF has been growing in the so-called ANC strongholds like Khayelitsha in Cape Town and was becoming a second choice for ANC voters.

This is revealed in an internal report assessing the status of the organisation in the only province the ANC does not govern. The report also reflects on the recent election outcomes and proposes plans to remedy the situation.

The report‚ titled “Status of the ANC in the W Cape – the untenable situation”‚ is authored by provincial executive committee (PEC) member Richard Dyantyi in his capacity as the head of the organising and mobilising committee in the province‚ and was presented to the provincial working committee.

Dyantyi confirmed being the author of the leaked document but declined to comment about its contents.

"While there has been decline and loss on one hand‚ there has also been growth in many ANC strongholds for the EFF. This is a worrying development‚" he wrote.

He wrote that since 1994‚ no opposition party had registered as many votes in a voting district or ward against the ANC in its strongholds but now there was a consistent trend of the EFF recording more than 1‚000 votes in a given ward.

“A sizeable percentage of ANC voters have not just stayed away. With this EFF growth trend‚ it appears that they have begun a journey of a second choice. In many of our communities‚ EFF has made some inroads and is starting to garner increasing support among the youth‚” reads the report.

Dyanti blames the ANC's poor programmes or non-responsiveness regarding youth-related matters for the poor turnout of youth at the polls. He revealed that a national elections team had raised concerns in December 2018 about "the invisible campaign targeted at youth and women". This‚ he says‚ was further compounded by poor results of the Progressive Youth Alliance (PYA) in all the student representative council elections at most institutions of higher learning in the province.

“The PYA lost in all four major universities and technikons including the many TVET colleges‚ to the EFF in the main. This was mirrored by the national election results where the ANC lost to the EFF in most VDs along university campuses‚” he added.

The party registered its poorest electoral performance in the May elections when it managed a measly 28% in the provincial ballot.

Dyantyi bemoaned the ANC's failure to capitalise on the “DA crisis” in the province which dragged on for months as the party publicly clashed with its then Cape Town mayor‚ Patricia de Lille. "An opportunity was presented to the ANC in the form of the DA crisis in the province. It was our determination to deepen the DA crisis. We were clear that we should not allow the DA to recover.

"The elections' outcome demonstrates that we failed in this regard‚" he said.

Dyantyi wrote that a repeat of the best electoral performances by the ANC in the province (in 1999 and 2004) were beginning to look almost impossible judging by the past three elections. “Life in the opposition benches seems to have become normal‚ without urgency for change‚" he added.

Dyantyi is scathing about the PEC which was elected in May 2015‚ saying its entire term "was punctuated by non-stop factional tendencies". The party's election campaign could not be insulated‚ he wrote.