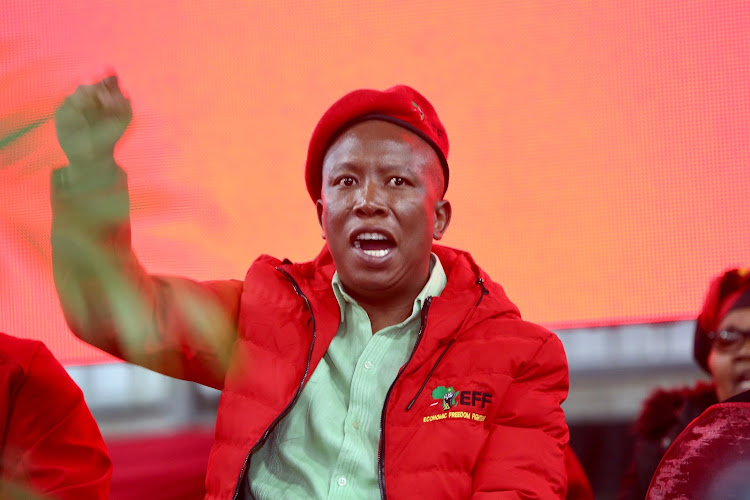 EFF leader Julius Malema has apologised to Inkosi Mandlenkosi Mahlalela of the Mlambo tribal authority in Mbuzini, bordering Mozambique and eSwatini, for being given a “sick” cow by members of the EFF.

Malema, who was speaking during the EFF’s sixth-year celebration at KaNyamazane Stadium outside Mbombela, Mpumalanga, on Saturday, started his speech by saying he was going to give five “fresh” cattle to Mahlalela as a way of apologising.

“I would like to apologise to Inkosi Mlambo for being given a sick cattle. When I looked on social media I felt sorry and before I leave here we will bring five fresh cattle as a way of apologising because what happened shows disrespect to our traditional leaders,” said Malema.

Malema told the tens of thousands EFF supports who converged on the stadium that there is no one that will kill the EFF and they are not scared of anyone.

Supporters arrived in numbers to celebrate the EFF's 6th birthday at Kanyamazane Stadium, Mpumalanga on July 27 2019.

"The people of Nkangala are queuing for water now DD has smoked the money to provide water. People, how can you lead a province where only one municipality in the 21 municipalities get one program.

““We are in a province where people are killed for tenders  and no one gets arrested. It is in this province where there’s no single successful court case against a politician and yet Mpumalanga is the most corrupt province.

WATCH | 'No one will kill the EFF' says Malema

"No one will kill the EFF, this EFF is going to govern."
News
2 years ago

"Thank you for voting for the most progressive party, a party with no white advisers. A party that is an effective opposition, a party owned by black people and no one can claim control over this political party.

"The people of Mpumalanga have said to us, they are making us official opposition because you love education. We are tired of illegitimate leaders like DD Mabuza who specialise in smoking; everything they come across they smoke,” said Malema.

Economic Freedom fighters leader, Julius Malema has thanked the voters for making the EFF an official opposition in the Mpumalanga provincial ...
News
2 years ago

Malema further distanced the EFF from Remgro chairman Johan Rupert and promised to force Rupert to pay rates and taxes at his Leopard Creek Golf Club in Malalane.

Nkomazi municipality, where the golf club estate is situated claimed it is owed R76.4m in rates and taxes after valuing the estate to be R1.3bn. However, Leopard Creek property owners took the matter on appeal disputing that the  estate which has 271 residences, along with recreational facilities and an 18-hole golf course with a club house, owed that sum.

EFF deputy president Floyd Shivambu is said to have advised Rupert to do an interview with one radio station. It was not clear if Malema was referring to Shivambu where he called for EFF members not to be cosy with white people.