Image: Alon Skuy The ANC and the DA have accused each other of failing the people of Alex amid protest action.

Since protests broke out in Alexandra township, politicians have wasted no time jumping on the bandwagon.

Residents of the township in the north of Johannesburg embarked on a service delivery protest on Wednesday. Poor waste management, escalating crime, substance abuse and illegal structures were among the grievances.

The crisis in Alex has caught the attention of the country and its politicians who have weighed in as elections loom.

Johannesburg's DA mayor Herman Mashaba took criticism from the ruling ANC on how he handled the protests.

On the first day, ANC elections head Fikile Mbalula accused Mashaba of being silent on the protests and failing the residents.

WENA @HermanMashaba YOU HAVE FAILED THE PEOPLE OF ALEX.

In response, Mashaba laid the blame on the ANC. In a statement on April 3, he said the previous ANC-led administration, as well as the provincial government for the city, had promised to invest in housing and development in Alexandra.

"This commitment was made without any financing and consolidated strategic plan for meeting the commitment- it was nothing more than an empty ANC promise," he wrote.

When protesters called for Mashaba to address them, the mayor sent MMC for public safety Michael Sun instead. Angered by Mashaba's no-show, residents refused to meet  Sun. 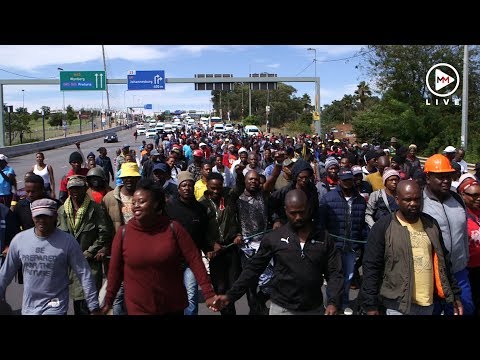 Mashaba accused the protests of being politically orchestrated. The mayor claimed that Sun, who is of Asian descent, was "racially abused by a crowd of ANC members, led by their ANC ward councillors".

On Sunday, the DA's Gauteng premier candidate Solly Msimanga laid criminal charges against the ANC for allegedly inciting violence in the protests.

Msimanga accused the ANC of using the protest as a political ploy ahead of the national elections on May 8.

Msimanga claimed that he has evidence of how the ANC was involved in the protest, including WhatsApp messages of the protest's organisers.

Gauteng premier David Makhura said the DA was "blame-shifting" and not delivering. He also said that he would visit Alex on Tuesday and President Cyril Ramaphosa is expected to visit on Thursday.

In a statement, the ANC in Gauteng said that the DA was "desperately hogging for attention" and that opening the case is a "cheap stunt" by the party.

ANC NEC member Tony Yengeni then posted a tweet warning that there were "clean and nicely polished" tyres waiting for Mashaba in Alex. Some viewed this as a reference to necklacing.

Mashaba responded by asking why an NEC member of the ruling party would promote "criminality".

Meanwhile, residents say they have been victims in a political war. Their crime? Wanting a better life.