Saxonwold compound does not match home described by Vytjie Mentor

Former ANC MP Vytjie Mentor's testimony to the state capture inquiry suffered a further knock on Thursday when experts who inspected the Gupta family's Saxonwold compound could not find many of the features she noticed there in 2010.

Testifying before the commission‚ department of public works veteran architect Erna Wiese described how she - along with a team of surveyors‚ engineers and electricians - had accompanied Mentor on a visual inspection of the Gupta compound in 2018.

The report on the inspection from Wiese and her team raised more questions about the veracity of Mentor's testimony to the commission in 2018.

Mentor previously said she was flown to Johannesburg in 2010 under the guise of meeting former president Jacob Zuma to discuss the Pebble Bed Modular Reactor programme. 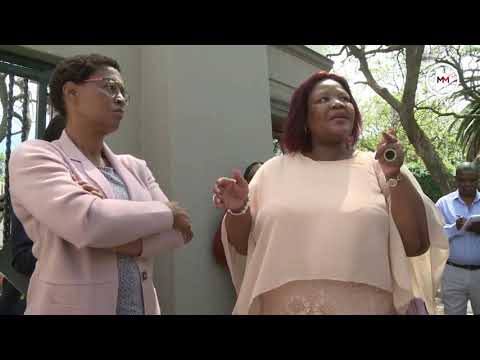 Instead‚ she claimed to have been chauffeured to the Guptas' Sahara offices and then to their Saxonwold home where she was offered the post of public enterprises minister in exchange for cancelling South African Airways flights to Mumbai once she took office.

Her description of the house is a pivotal aspect of verifying her claims.

During the inspection‚ Wiese's team was looking for specific details that Mentor mentioned in her testimony: that there were about four or five stairs leading to the main entrance of the house; there was a pillar near a large window in the lounge; there was a colourful mural on one of the walls; and a guest bathroom decorated with golden faucets and knobs with gold mirrors on the walls.

The Gupta compound consists of four main properties on Saxonwold Drive‚ numbers 1‚3‚5 and 7.

"When we arrived at the property‚ Mentor was not sure whether it was the property. We walked from 5 to 7‚ past 3 to 1‚ in order for Mentor to identify the house in question … We only knew that she was supposed to point out a house and she couldn’t do that immediately‚" said Wiese.

"She settled on No 5. We walked around the building on the south side and then we went into the house and did an internal visual inspection … After that we went to No 7 for inspection. Mentor did not feel comfortable with No 7‚ it was too modern in her words. The configuration inside the house didn’t correlate with anything. She dismissed No 7 and said we should go back to No 5."

The steps at the entrance:

Wiese said 10 steps were identified‚ not the five or six Mentor had remembered.

"She also could not remember the columns on top of the pedestals. She explained that the five or six steps that she recollected walked easily‚ and had a wider tread than what we were currently standing on … There was deliberation about whether they were white or grey‚ and she remembered marble steps. We encountered granite steps‚ although light in colour‚" Wiese said.

The pillar by a large window in the waiting area:

"We could not identify any columns. There were a lot of questions asked by Mentor regarding the foyer and the surrounding areas ... She couldn’t find the pillar and she remembered the space as larger and more open. We looked but could not find a place where that pillar could have been. The visual clues were such that the configuration in that place was not changed recently‚" Wiese said.

"The purpose of a pillar is usually to hold something up‚ so we were expecting a beam over the column or even under the floor slab. We could not find any evidence of such a scenario where a pillar made sense. If you remove that column and it was load-bearing‚ you would replace it with something else to keep up the beam. There was no clear indication of a new piece of skirting. There were dated light switches. It indicated to us that the wall wasn’t worked on recently‚ or even in 2010 … We couldn’t see on the floor finishes or on the ceiling surface where such a column may have been removed."

Wiese described that upon entering the foyer of the house‚ there were two recesses.

"In those two recesses‚ there are murals and they are monotone in colour. Mentor could not recall them or the recesses. We also found a pillar on the lower level but Mentor discounted those to say she never went down stairs and the pillar was too narrow. Mentor talked about a colourful mural‚" she said.

"We were expecting a gilded bathroom. We found a fairly dated guest bathroom with hardly any gold finishes. With the visual clues we are led to believe the finishes are dated. There was no adjacent gentleman’s bathroom‚ there was a bedroom‚" Wiese said.

Only the position of the kitchen correlates with Mentor’s testimony.

Wiese made it clear that the inspection was visual only‚ and to properly establish if changes were made‚ more investigation would be required by specialists.

Wiese said the commission would need to acquire the services of an architect who could do historical mapping‚ a paint expert‚ and a material conservator which in total could cost about R810‚000. This would exclude the cost of returning the house to its original state once the probe was complete.