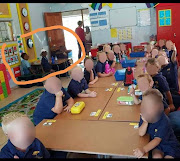 Trade union Solidarity will on Tuesday announce the legal action to be taken to have the suspension of Schweizer-Reneke teacher Elana Barkhuizen lifted.

Barkhuizen was suspended last Thursday after a photo of four black children sitting at a separate table behind a door away from white pupils in a Grade R class at Laerskool Schweizer-Reneke went viral.

The North West school last week dismissed any allegations of discrimination or racism at the school.

“(On Tuesday)‚ trade union Solidarity and suspended Schweizer-Reneke teacher Elana Barkhuizen will address a joint press conference on recent events at the town’s primary school‚” the union said in a statement.

Hermann said had Lehari listened to the other side‚ he would have reached a different conclusion.

“However‚ he charged and convicted her in bundu court fashion in the presence of a worked-up crowd‚” Hermann said.

Solidarity said it would also announce steps to be taken against political parties that had exploited the incident for political gain.

Solidarity said Barkhuizen would make a brief statement but she would not be in a position to take questions or grant interviews.