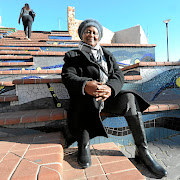 Veteran actress Nomhle Nkonyeni has died at the age of 77.

She died in hospital on Wednesday morning after she was admitted on Friday according to a close family friend.

“e.tv is deeply saddened by the news and our condolences go out to Nomhle Nkonyeni’s family and the cast and crew of Scandal!”,  e.tv Head of Local Content Ziyanda Mngomezulu confirmed the news to SowetanLIVE on Wednesday.

She has also starred recently in filmmaker Jahmil X.T. Qubeka’s two newest films Sew the Winter to My Skin and Knuckle City.

Her other memorable roles have been in Igazi, Gaz'lam, Zero Tolerance, Tsha Tsha and Home Affairs.

In April, Nkonyeni was awarded the order of Ikhamanga in Silver – a prestigious honour by the President Cyril Ramaphosa for excellence in the fields of arts, culture, literature, music, journalism or sport.

Her fans have taken to social media to pay tribute to her.