Graduate makes a killing with iskopo 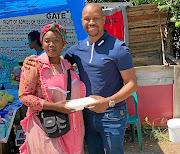 A KZN student who sold cow-head stew to fund her graduation day and support her family while applying for jobs has become a social media hit.

Sinenhlanhla Shange, 28, from Waterloo near Verulam, northern Durban, resorted to selling the stew, known as iskopo, and phuthu (scrambled pap) outside the King George Hospital in Sydenham.

Shange's customers showed support for her cause on social media, posting messages of encouragement.

"My love for cooking traditional food has made me to enjoy serving a crowd," she said.

Shange said she did not want to waste time after realising how hard it is to get a job. She was a student of criminology and psychology at University of KwaZulu-Natal (UKZN).

"I had to think fast, especially knowing my graduation day was coming in April. I want it to be special, so I need money for that. I completed my degree in December 2019."

The mother of one said she buys cow heads for about R200 per head, skin and clean them up and later chop them up to get the meat off the bone.

Then she cooks the meat slowly on her gas stove until it becomes tender and delicious.

"Young people need to understand that sometimes you need to use your hands to feed yourself because waiting for a hand-out might cost you more wasted time," she said.

"I started the business by getting a R600 loan from my mom and I made sure I paid her back after my second batch and moved on."

"I am sold out everyday by 2pm and I can go and prepare for the next day of trade. It's hard work but I am making enough to put bread on the table."

Shange grew up in Waterloo and started school at Sherwood Primary School and later matriculated at Mgandeni High School in 2011.

"In 2012 I worked in a factory as I had no money to go to varsity. I got approved by NSFAS the following year and began studying towards my degree."

Shange was raised by her security guard mother and her grandmother.

"I come from nothing and the little my mom could give had to be shared among us as siblings, so I looked for weekend jobs and sold cigarettes at res until I saved enough and became a loan shark to my peers. I have always had to find ways of making money because of the situation at home."

She will study part-time for an honours degree at UKZN while she continues with her business.