The story of Wandi and Sechaba’s urban street label, Loxion Kulca, is one about black identity and expression

It was an unprecedented era with the biggest songs on SA’s black radio stations being local hits by Zola or TKZee.

This was a significant shift as music by US artists such as R Kelly and Ja Rule was pushed to the back-seat or down the charts.

And this also cut across to fashion, with the coolest brand to rock becoming Loxion Kulca, a fresh kasi streetwear label that cemented one’s street cred.

Zola and TKZee - big stars at the time - also wore Loxion Kulca, so did dozens other relevant celebrities and TV personalities.

This is the early 2000s which coincided with the powerful emergence of radio superstars like Yfm’s DJ Khabzela, another big fan of Loxion Kulca.

Yfm had led the revolution by putting kwaito on high rotation, in the process it became the biggest radio station in Gauteng.

Then president Thabo Mbeki was preaching African Renaissance and young black South Africans were responding to his sermon by carving out their identity in music and fashion. Local was definitely lekker .

Wandi Nzimande and Sechaba Mogale, founders of Loxion Kulca, were the young trailblazers who achieved what was then unthinkable.

Not many people know that the duo was influenced and impressed by stories of Nubian traders in ancient Egypt so much that they named their first company Nubia.

They had learnt that Nubia was home to one of Africa’s earliest and most powerful kingdoms.

They were also impressed by tales of Nubian rulers who had conquered and ruled Egypt for years, building monuments such as royal pyramids, which still exist both in Egypt and Sudan today.

Mogale, who grew up in exile, mainly in Lusaka, Zambia, had been exposed to many cultures. Nzimande was raised in various parts of Soweto. He still identifies various sections of the township including Zola, Emndeni and Rockville as his home.

Even though they were not living in the township when they started their business, the kasie culture and identity dominated most of their conversations.

“That’s all we used to talk about, I used to tell Chabi (Sechaba) a whole lot of stories, I was born at Baragwanath Hospital and I know Soweto like the back of my hand, so it was very easy for us to have this trade off,” Wandi said.

He said he was intrigued by hip-hop music and culture which Mogale had been exposed to while growing up in exile.

“Sechaba knew everything from Big Daddy Kane, Ice T to Public Enemy and Run D.M.C, which was pushing a lot of consciousness and my thinking was already wired like that, it was about identity,” Wandi said.

Nzimande and Mogale were all about cool clothes, conscious music, especially rap, and the need to be proud of their identity.

“What formed our thinking is that we were big on expression, Sechaba was exposed to a lot of international cultures. I was raised on bubblegum (music).” 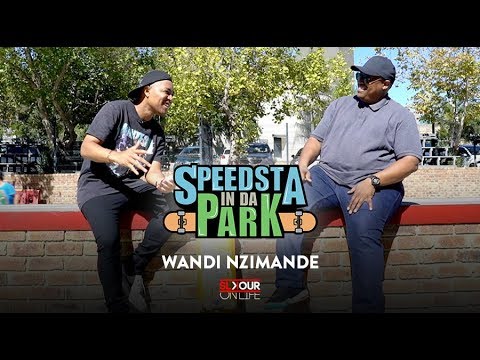 The trade off between the two became a melting pot which culminated in an idea to start their own brand. In 1998, a year before they launched Loxion Kulca, with the help of their relatives, they made crocheted hats for themselves.

“We were young and broke at the time, we couldn’t afford the likes of Fubu, Moses Malone, Karl Kani and then we came with a stupid idea of what if we made our own.”

Mogale was a big sneaker fanatic while Nzimande was crazy about hats. The hats being a lot easier to start with, launched Loxion Kulca.

In 1999, they joined forces with clothing franchiser Brian Abrahams, who initially loaned them money to kick-start Loxion Kulca, which they had already registered.

Abrahams somewhat believed in their vision through watching them push their brand. “And Brian wasn’t involved in the business but he saw that lezintwana ziyaspana (these boys are working), and asked again: ‘what else do you need?’”

We were young and broke at the time, we couldn’t afford the likes of Fubu, Moses Malone, Karl Kani and then we came with a stupid idea of what if we made our own

They then told Abrahams of their plan of going to the annual National Arts Festival in Grahamstown (now Makhanda) where they had never even set foot before.

Nzimande and Mogale had felt that if they could sell their brand at the festival, that would easily be the fastest way to grow the brand across the country. Their idea was to get around 100 caps and maybe 50 T-shirts, however Abrahams advised them to go big and even put in R40,000 to help launch them.

Off they went to Grahamstown with half the stock they had acquired with Abrahams’ help. The trip would propel their clothing brand in a way they never imagined.

With their girlfriends in a car with a boot full of Loxion Kulca stock, mainly hats and caps and just little money on them, they hit the road... armed with hope and belief.

“Grahamstown was something Wandi identified. I’m not even sure where he knew the festival from but he recognised it as a place where they’d be a lot of artists and musicians,” Mogale recalled.

“There was confidence in at least knowing how to put ourselves together in terms of how we looked, and we were using these tools that were foreign and Grahamstown seemed like a perfect place to test our stock, and Wandi had the foresight to identify that festival as a perfect place to show up and have a presence.”

Image: Thulani Mbele Wandi Nzimande and Sechaba Mogale were influenced and impressed by stories of Nubian traders in ancient Egypt

Nzimande chipped in: “We didn’t even know how to get there, we just followed signs. We just had enough money to drive down with a boot full of stock.” He remembers that on their first night at the festival, they had around R150 between them.

“I think we bought a few sandwiches, the next day we didn’t really have money left... we had to sell a few hats.”

Some friends who had travelled to the festival helped them sell their hats. That’s how the Loxion Kulca brand was born. Like a rose that grew between concrete slabs, it couldn’t be ignored.

Abrahams was very impressed by their hustle and decided to get fully involved in the brand. Not only did he fund it, Abrahams showed so much faith in the label that he even re-bonded his house to raise funds for Loxion Kulca stock to be mass-produced.

In a short space of time, Loxion Kulca was in Sales House and Edgars stores, and could be snapped up in more than 900 stores nationwide, raking in an annual turnover of around R80m in its prime.

The three-man partnership was a solid force, but the shutting down of several local factories that supplied them, proliferation of fake goods and disagreements on the company’s direction, drove the them into a difficult period, especially after Abrahams’ passing. To add salt to the label’s misery, Mogale left in 2007.

The label, however, weathered the storm as it remained alive and available in more than 400 stores nationwide.

Loxion Kulca is now in its 20th year and there’s renewed energy, as Nzimande and Mogale are talking business again.

The future involves electronics, which Nzimande refers to as the “new fashion”. Perhaps the story of Loxion Kulca is entering a different chapter in a totally different era.