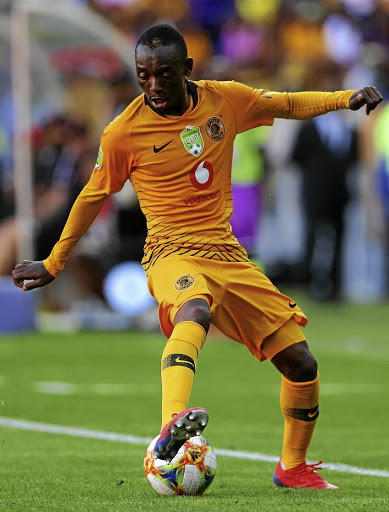 Khama Billiat of Chiefs during the Nedbank Cup match against The Magic FC in February.
Image: Gallo Images/ Richard Huggard

Kaizer Chiefs want-away forward Khama Billiat was expected to put to rest two issues yesterday: whether he was staying put in Naturena, and if he has recovered from his injury.

Billiat was scheduled to make his new season debut against SuperSport United in a Premiership league match at FNB Stadium yesterday.

The Zimbabwean international striker was reported by Chiefs to be injured before the start of the new season, however, he took to the field in the Carling Black Label Cup, against Orlando Pirates.

Coach Ernst Middendorp has said Billiat is still recovering from a "slight knock" sustained during the Africa Cup of Nations in Egypt that was aggravated during the match against Pirates .

The injury matter has raised several questions, with Chiefs also barring the 29-year-old from facing the media.

Chiefs have not allowed him to speak about the injury or the much-publicised potential move to Downs. Chiefs spokesperson Vina Maphosa turned down a request from Sunday World to speak to Billiat.

"It's not possible," said Maphosa, "he is not selected for this media day. Remember, he has not played a match yet. Let Khama play one game at least [before giving interviews]."

Chiefs have flatly denied they are entertaining an offer from Sundowns for Billiat to return to Chloorkop.

In what could be the biggest transfer in the history of the Premier Soccer League, Sundowns have upped the stakes in pursuit of Billiat's signature for the second time in four seasons. The Chloorkop side has put a R15m offer on the table but Billiat is believed to be worth more than that. He is said to be worth $1m (about R15m) on the local football market, but well over R20m on the international market.

Billiat, who did not feature for Amakhosi in their two season-opening league matches, joined Sundowns from Ajax Cape Town in 2013.

Amakhosi midfielder Lebogang Manyama reiterated that the club and other players believe Billiat should not leave the Soweto Glamour Boys camp.

Manyama said Billiat will always be the subject of speculation as local and overseas clubs clamour to have him in their books.

"The important thing is that we stay positive. It's not about individuals, we must take responsibility as a team. He [Billiat] is very much important as everybody else to the team.

"He's here and he's been working hard. We expect that from players like him every year, it [talks of move] could happen again next year."