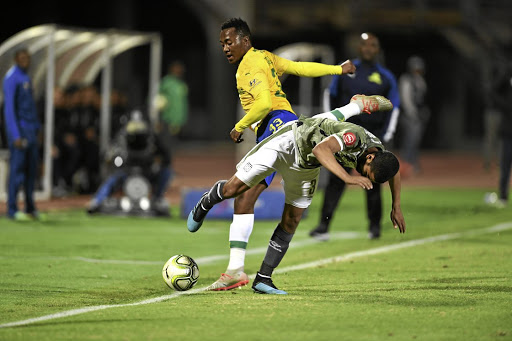 A truce has been reached between the PSL, the SABC, MultiChoice and the government's ministry of sport, acting as a mediator, to resume screening PSL matches on the public broadcaster's platform, starting yesterday.

The PSL's Absa Premiership is already in its third round of matches and the MTN8 semi-finals are pencilled in for next weekend.

Since the league kicked off early this month, millions of South Africa's followers of the beautiful game were unable to watch or listen to their favourite teams in action.

But the deal, brokered by sports minister Nathi Mthethwa this week, didn't come cheap for the broadcaster.

The cash-strapped SABC had to pay a heavy price in an effort to end the total blackout.

MultiChoice's SuperSport owns the TV rights to the PSL, and sub-licenses them to the SABC, but negotiations reached a stalemate a few days before the league was due to kick off.

Soccer Scene has been informed that the SABC, like a beggar with cap in hand, had no choice but agree that SuperSport should provide it with the live feed of all matches, so as to cut costs on its part.

The SABC boasts a huge outside broadcast (OB) operation, so those workers are now uncertain of their jobs, with only the part-time commentators and talking heads' jobs spared.

There is much that remains unresolved with the deal that covers five years of top-flight football on the small screen and radio, including an increased number of National First Division matches.

This takes us to another outstanding matter, that of the blackout of national team matches, following a breakdown in negotiations between Safa and the SABC.

There is no end in sight in the rift between the public broadcaster and the national football governing body over the TV rights, with everyone in limbo.

Sports minister Nathi Mthethwa is confident that the SABC and Pay-TV company Multichoice will find a solution to the PSL broadcast rights impasse ...
News
2 years ago

The matches involve Bafana Bafana, Banyana Banyana, Amajita, Amajimbos, Basetsana and Bantwana, as well as other amateur tournaments, including the women's national league launched this week without financial backing.

As there is no contract in place, national team matches are flighted game by game, depending on an agreement being reached.

Bafana and Banyana blackouts have become a norm on the public broadcaster platform since the impasse with Safa. Both parties are pleading poverty.

Safa has a contract with SuperSport for all future international football matches to be screened on the pay-TV platforms, but not with the SABC, after the previous five-year contract lapsed.

They have met on several occasions to try to broker a new deal but no consensus was reached. Matters came to a head when Safa accused the SABC of making a "discourteous offer" last year.

The acrimonious relations further deteriorated after Safa publicly announced that the national broadcaster owed it millions from the previous agreement.

Last September, the SABC nearly failed to broadcast Bafana's Africa Cup of Nations qualifiers against Libya, securing the rights after paying R50m a few days before the crucial kick-off.

Bafana will be in action against Zambia's Chipolopolo in a friendly match in Lusaka on September 7.

On Friday, Banyana will be away to Botswana in a Tokyo 2020 Olympic qualifying match. It remains unclear if the matches will be shown on SABC.

As they say, the jury is out on whether a last-minute pact can be sealed.