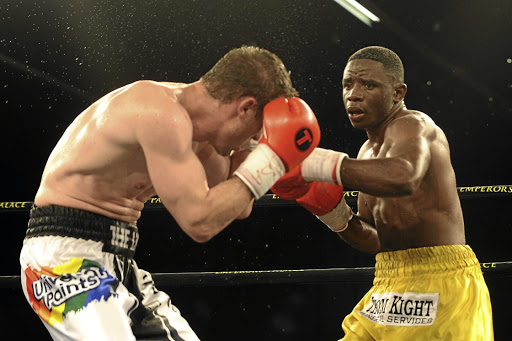 Boxing is a complex sport with a simple premise - beat the other man up and either hit him more effectively to win on points or hit him so hard or so much that he can't continue to fight.

This is the simple premise.

Who is likely to do that between defending IBO Africa super-middleweight champion Rowan Campbell and challenger Patrick Mukala?

The two will collide at Emperors Palace in Kempton Park, Ekurhuleni, on Friday night.

Let us compare the two fighters.

Campbell is a boxer with average power and that is illustrated by the number of bouts he has won via short route - six in 10 wins.

His confidence has improved since going 12 rounds to win the SA title against equally competent foe Renson Hobyani last year.

Campbell's acid test was Alex Kabangu, the tough-as-teak Congolese who came in as a late replacement in February when the champion made his first defence.

Campbell was made to sweat for his points win before labouring unnecessarily against Yanga Phetani over 12 rounds on May 10.

Mukala, also from Congo, proved from his first fight here in 2014 that he can crack. He did that to eight of his nine opponents before going 10 rounds for the first time with lion-hearted veteran Ryno Liebenberg in 2017.

Mukala lost that fight but bounced back to chalk up two consecutive stoppages.

What could work against him on Friday is his long lay-off.

The last time the WBA Pan-African champion fought was on September 21 last year, when he drew with unknown Ghanaian Emmanuel Anim over 10 rounds.

But if crude power alone is anything to go by, then a new champion will be crowned on Friday night.

Knapp will welcome Aleksandra Zhuravskiy of Kazakhstan over 10 rounds in a junior-middleweight nontitle fight while Malajika and Gloss will do battle over 10 rounds for the Gauteng junior-bantamweight title.

There will be three more nontitle fights and action will begin at 7.30pm.