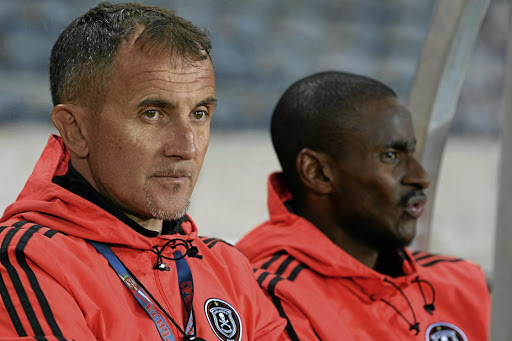 The tension between Milutin "Micho" Sredojevic and Rhulani Mokwena has long been bubbling under but the bubble finally burst this week.
Image: Lefty Shivambu/Gallo Images

Milutin "Micho" Sredojevic's resignation as Orlando Pirates coach came like a bolt from the blue for many soccer followers who regarded him as the perfect coach for Bucs .

However, the sudden resignation by the Serbian coach had nothing to do with any strife between him and his assistant, Rhulani Mokwena.

It had everything to do a sordid act the now ex-Bucs mentor is alleged to have committed. He is now in hot water over this sinful behaviour.

Distracted by the latest saga in his life, Sredojevic's star-studded Pirates suffered an embarrassing 3-0 defeat to SuperSport United in their midweek league clash.

After two straight defeats, the first being the CAF Champions League 1-0 loss away to Zambia's Green Eagles last Saturday, it became crystal clear to Sredojevic that he was no longer in charge of his team, thanks to the latest personal circumstance he is facing.

Something had to give and he had no option but to call it quits.

I don't agree with those who say the two negative results are the straw that broke the camel's back.

My narrative stems from the fact Sredojevic's private life and conduct became a talking point among his technical staff and players.

I also doubt there was any prudent soccer journalist who was surprised when Pirates made the "startling" pronouncement on their website on Friday that Mokwena would take over from Sredojevic.

Both Bucs and the Serbian mentor tried hard to put a spin on the whole resignation saga.

Pirates boss Irvin Khoza is not known as a man who fires coaches at the stroke of a pen.

Orlando Pirates coach Milutin "Micho" Sredojevic resigned because he is facing charges of indecent exposure after he allegedly tried to force ...
News
2 years ago

The chairman is unlike many in the PSL who have gained notoriety for the speed with which they pull the trigger. And over the years, his patience with coaches has at times irked the Bucs die-hard.

As things came to a head in the Buccaneers ship, the head coach's conduct outside football became intolerable to the extent that Khoza was readily prepared to give an opportunity to a young local coach and, most importantly, a "family member".

Mokwena, who uses his mother's surname, is a member of the fourth generation of Sonos at Pirates. His grandfather Eric "Scara" Sono was captain before his father "KK" and uncle Matsilele "Jomo" Sono turned out for the "Skull and Bones".

It's an understatement to say Mokwena is ambitious and prepared to guide Pirates to greater heights if given the opportunity to become a permanent head coach.

It's also an open secret the Sredojevic's situation had become untenable. He had been hinting about leaving after the alleged scandalous behaviour to join another club outside the country.

The spin-doctoring of coaches' resignations is a worldwide football phenomenon. It's not unique to Mzansi that a coach quits because of "personal reasons" while we know he was pushed, in this case, because of his despicable behaviour. Clubs hate scandals.

The two humiliating defeats came at a time when tensions were running high because of the coach's obscene behaviour.

Sredojevic did not step down of his own volition. The man was pushed following his abhorrent deed.

It's often said that a coaching position is usually the most poisoned chalice any mentor can dream of, but in the case of Sredojevic, he brought it upon himself and fell on his sword.

Micho, as the coach is affectionately known, has disgraced himself and Pirates.