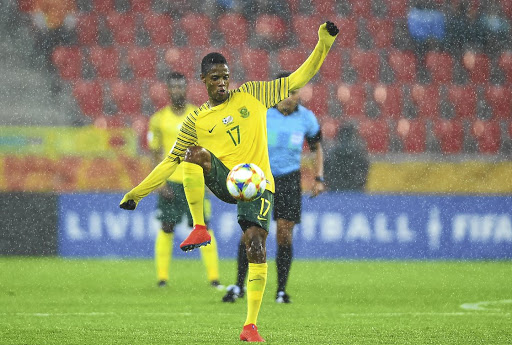 Luvuyo Phewa of SA in action during the Fifa U-20 World Cup in Poland.
Image: Lukasz Sobala /Getty Images

Emerging star Luvuyo Phewa is expected to spearhead South Africa's attack in the second leg of the African Nations Championship (CHAN) qualifier against Lesotho at Dobsonville Stadium in Soweto at 3pm today.

On the books of second-tier outfit Real Kings, Phewa was SA's livewire in the away leg, where Lesotho claimed a hard-fought 3-2 victory over the makeshift Bafana Bafana side, led by Under-23 coach David Notoane at Maseru's Setsoto Stadium last week.

Phewa came off the bench in the second half to make it 2-2 before Lesotho scored the winning goal in the 85th minute. Bafana's first strike came from captain Tercious Malepe.

"I think we played very well away, but we were shocked by the crowd. The stadium was packed and the home fans cheered for their players. However, things will change in the second leg because we are playing at home," said Phewa.

Phewa, who is considered as the next big thing in SA football, was with Amajita at the Fifa Under-20 World Cup in June. The 19-year-old striker's rather meteoric rise has since seen him attract interest from the likes of Orlando Pirates and Mamelodi Sundowns.

"Playing at the World Cup was a wonderful moment for me, it's these tournaments that make players grow in experience. I learnt a lot of things and I'm trying by all means to use that experience at the moment as I'm with the CHAN team," said Phewa.

"About the interest from others teams, my goal is to play in Europe in future.

"I want to play my last season at Kings. After that I am positive I can move abroad."

The winner of this fixture advances to the final qualifying round. The 16-team CHAN tournament will be hosted by Cameroon from January to February next year.