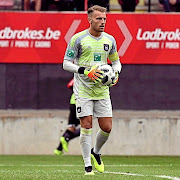 De Jong is the former Netherlands U-17 and U-19 international, having played for a number of European clubs including Feyenoord in his country's Eredivisie, the top tier of Dutch football.

De Jong, 25, left Anderlecht a disgruntled man after he could not make the starting line-up for the past two seasons.

He has been training with the Premiership rookies since the team started its pre-season preparations last week.

Stellenbosch FC coach Steve Barker confirmed that De Jong was on their books, noting that the club was looking forward to beefing up all areas in the team over the next few days.

"We will be making more announcements in the next two to three days. We hope to finalise everything by the end of the week. The keeper comes at a time when we need an experienced goalkeeper," he said.

"Boy de Jong comes with the experience we need. He could be an influence, especially to the young players. Our aim is to build a strong and solid team that can hold its own among the other teams in the league."

Stellies, as the club is affectionately known, are planning to add more experienced players in their squad ahead of their debut 2019/20 season starting in August. Their baptism into the Premiership comes with a league fixture against Chippa United at home - the Coetzenburg Stadium on August 3.

They have made a number of signings as they look forward to their first season in the Absa Premiership. The big signing this week was veteran defender Morgan Gould, young full-back Zimo Brenner, midfielder Dillian Solomons and striker Waseem Isaacs.

Apart from local players and De Jong, Barker has not made wholesale changes to the squad that was crowned National First Division champions in May, without having to go through the tedious end-of-season promotion/relegation play-offs. In 2012 Barker, 50, led Pretoria University to promotion to the Premiership and was AmaTuks' head coach for two seasons.