Putting boots on feet and smiles on faces 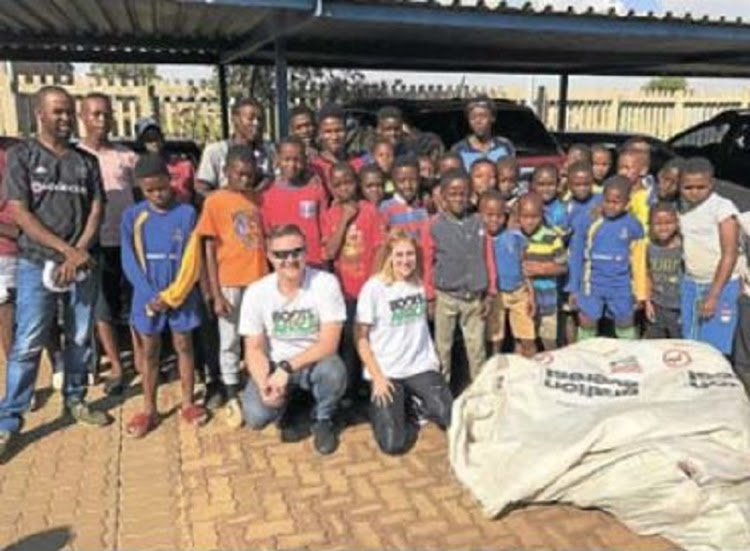 Gavin Hendry and Sarah Gardner collect used soccer boots from across the globe to donate to the needy.
Image: Supplied

"What drives me is to see the smiles on kids' faces when they put their soccer boots on."

This is how philanthropist Gavin Hendry explains his motivation and involvement with the Boots for Africa organisation.

Boots for Africa is a non-profit organisation registered across the UK that has various branches on the African continent.

Incepted by Sheffield FC chairperson Richard Tims just before the 2010 Fifa World Cup, this charitable organisation collects used soccer boots and balls across the globe and donates them to underprivileged children.

"In the past five years we've collected boots mainly from Australia," says the 42-year-old Hendry.

In the true spirit of the famous proverb that says charity begins at home, Hendry's first work with Boots for Africa was to lend a helping hand to a football club he was part of in 2014 in his home town of Alberton on the East Rand.

"The first batch that we handed out was to a soccer club which I was involved in, Green Stars FC, in Alberton. We did 200 pairs there," he reflects.

"The following year we handed out about 1,200 soccer boots to the kids in Eden Park and the Green Field area.

Banyana star a celeb off the pitch
Sport
2 years ago

"To date, we've collected about 5,000 boots and distributed them to kids in SA. We also hand out soccer balls. We've done Rustenburg, we are planning to go to Venda."

Athletic and casual footwear company Puma SA and transport and logistics operator Bolloré Logistics are some of Boots for Africa's donors.

"We are fortunate to have Teboho Mokoena, together with Rhoda. Whenever we go out to donate boots and balls they come with us," says Hendry.

"In the last three weeks we've had donations coming; people wanted to give us cash and we turned it down.

"We told them that we've got a deal with Puma, so they must give the money to Puma and we collect the boots."