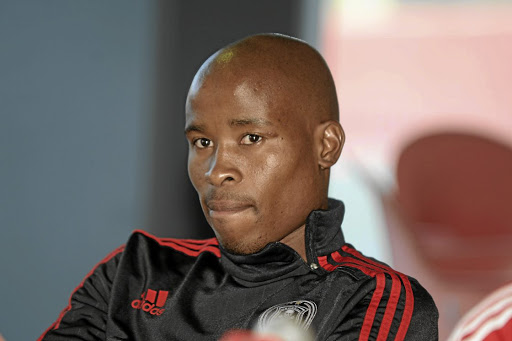 Thabo Matlaba is tipped to join Wits or Highlands Park after his recent departure from Bucs.
Image: Lefty Shivambu/Gallo Images

The tug-of-war for the signature of Thabo Matlaba appears to have turned into a two-horse race between Bidvest Wits and Highlands Park.

The industrious wing-back is wanted by a number of clubs but the two Gauteng clubs are frontrunners. Maritzburg United and Black Leopards have outside chances to signing him.

Matlaba's agent Abbie Rasimpi said he was hopeful that a deal would be struck in the coming week.

"Look, we are talking with a number of clubs who are interested in Thabo and a deal will be concluded soon," Rasimpi said. "I am hopeful that we will have something next week. At the end of the day it's up to Thabo to decide, so you will be the first to know."

A reliable insider with knowledge of the negotiations said: "I know that our club has made contact with Matlaba about his services but we are not the only one. I think he wants to remain in Gauteng."

Outside of the traditional big clubs, the well-resourced Wits and Highlands are among the few that can afford Matlaba's substantial salary demands.

Caf dates could give PSL headache next season

Premier Soccer League (PSL) officials are facing a potential fixture nightmare in the coming season after they were forced to finalise the new ...
Sport
2 years ago

Matlaba, 31, parted ways with the Buccaneers after declining a salary reduction. Bucs boss Irvin Khoza admitted that his club was unwilling to continue paying his big salary.

"It's unfortunate that Matlaba had to leave because he was our former captain and we wanted to keep him," Khoza said. "We asked him to make a consideration on his package and come back with a proposal but he couldn't see himself reducing his package and asked for a clearance."

Khoza added that the former Free State Stars winger's contract had benefits that would have taken care of him even when he retires.

"Unfortunately, because of his circumstances, which I understand, he wanted to go elsewhere to maintain the same salary structure," he said.

"I can't talk about deals that are not yet done," he said.

Highlands coach Owen da Gama also did not want to be drawn into commenting on the matter.