Bafana ready for a 'good game' 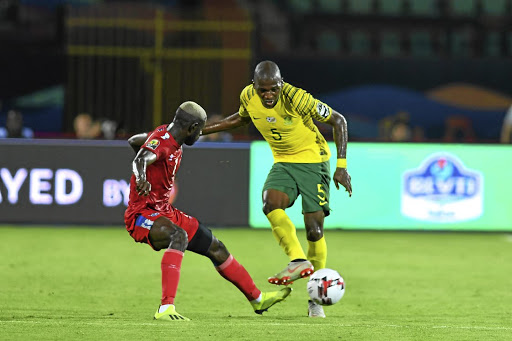 Bafana defender Thami Mkhize believes their 1-0 win over Namibia at the Africa Cup of Nations stands them in good stead to reach the knockout phase.

Bongani Zungu scored the all-important goal against the Brave Warriors at Al-Salam Stadium on Friday night.

Bafana's chances of going beyond the group stage improved considering that they are in the mix for one of the places to be taken by four third best-placed teams if they miss out on the top two spots in Group D.

Stuart Baxter's men take on group leaders Morocco at Al-Salam at 6pm tomorrow. Mkhize reckons Bafana have given themselves a real fighting chance.

"It was obviously going to be a difficult game playing Namibia, but we tried to create many chances because [in] our first game against Ivory Coast we didn't have one shot on target," said Mkhize. Bafana lost 1-0 to the Ivorians.

"From the Ivory Coast game, we improved in terms of creating chances.

"If you look at our shots on target against Namibia compared to when we played Ivory Coast, there's a lot of improvement there. We are grateful that we managed to win the game," said Mkhize.

"The most important thing was getting maximum points against Namibia, so that we play the final game against Morocco with confidence, so anything is possible.

"We still have a chance to study them, so we will give them a good game," he said.

Mkhize had a knock against Namibia and was replaced by Ramahlwe Mphahele in the second half, but he is expected to be fit for the match against Morocco.