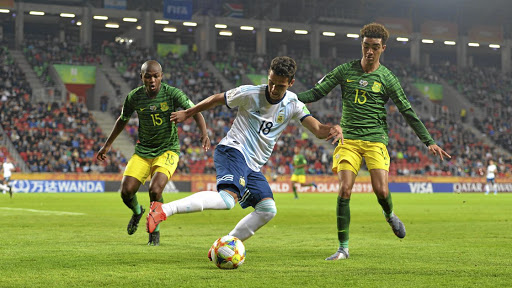 Cristian Ferreira of Argentina is challenged by SA's Keenan Phillips and Siphesihle Mkhize during their U-20 World Cup match at Tychy Stadium in Poland. Amajita have been eliminated.
Image: Aitor Alcalde/Getty Images

There are numerous factors that contributed to Amajita's failure to qualify for the knockout phase of the ongoing Under-20 World Cup in Poland. Sihle Ndebele analyses South Africa's abortive exercise in the global spectacle.

Lack of hunger and commitment

Most of the players didn't play their hearts out, especially in the second half of the first two games against Argentina (5-2) and South Korea (1-0) respectively.

Captain Khulekani Kubheka, who saved the penalty in the last match against Portugal (1-1) on Friday and hard-nosed holding midfielder Siphesihle Mkhize, were the only players who showed determination. The deficiency in hunger was evident against Portugal as players seem excited for a draw.

In the opening game against Argentina, Amajita conceded a penalty and a red card.

Though both decisions were reviewed through the video assistant referee (VAR), Amajita lacked discipline and that proved detrimental.

Centre-back Givemore Khupe and left-back Malebogo Modise were the chiefs in making dirty and dangerous tackles.

SA conceded their second penalty of the tournament against Portugal. Luckily, Kubheka saved it. Our rearguard was simply in a shambles, conceding seven goals in three pool games.

Coach Thabo Senong rued missed first half chances as South Africa slumped to a 1-0 defeat to South Korea in their second match at the 2019 FIFA ...
Sport
2 years ago

This approach forced SA to abandon their customary passing game for long balls. It looked like Senong was more concerned about defending than attacking.

Against Korea, he amazingly introduced defensive midfielder Njabulo Blom for attacker Oswin Appollis, when we were already a goal down.

Bluntness in front of goal

Scoring three goals, of which two of them were spot kicks, was always not going to be enough for Amajita to progress to the last 16.

Our strike force, led by Monaco's Foster and Thabiso Monyane of Orlando Pirates, fizzled out.

The duo only scored from the spot against Argentina and Portugal respectively. The other goal, from a corner kick, was netted by Keenan Phillips of Bidvest Wits.