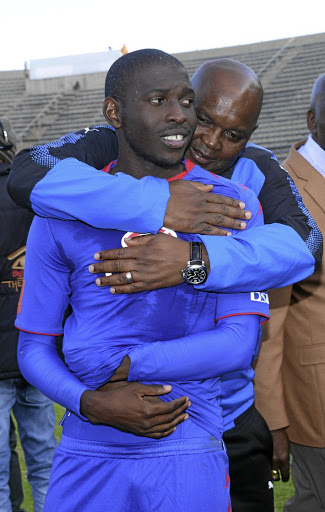 Mamelodi Sundowns and SuperSport United are set to hold crunch talks in the coming days over a blockbuster deal for star winger Aubrey Modiba.

Sundowns have eyed Modiba as one of their key signings in the upcoming transfer window. The 23-year-old is going into the final year of his current contract with Matsatsantsa a Pitori.

Downs coach Pitso Mosimane has been a long admirer of the tricky speedster from Matshelapata village, near Polokwane.

United chief executive Stan Matthews conceded that Modiba's future will be decided in the coming window.

"Look, we are aware that there is some interest in Aubrey from Sundowns and other clubs for that matter and that does not surprise us because he is very talented," Matthews said.

"He is one of the young guys in the team whom we believe have a very bright future and are good enough to go overseas. For us to lose him to a local club would be a big loss, but we would let him go for the right reasons."

It is understood that SuperSport will accept nothing less than R12m to make the deal happen. Downs will be looking to use George Lebese and Lucky Mohomi as a sweetener in a cash plus swap deal for Modiba.

Both are among a group of players who have grown frustrated with their lack of game time at Sundowns.

Lebese spent the last six months on loan at SuperSport while Mohomi came close to making a loan move to the Tshwane neighbours back in January.

In the past, Lebese has been open about his desire to remain at SuperSport.

When quizzed about the imminent Modiba deal, Sundowns acting general manager Yogesh Singh did not want to divulge any details.

"Obviously, I cannot disclose any of our transfer activities until the deals are complete," Singh said.

"If there are any player changes, an announcement will be made."

Modiba's agent Glyn Binkin couldn't be reached for comment. Sundowns will be looking to have their signing wrapped up by July 11 when they have to submit their provisional squads for the CAF Champions League.

Amid embarrassing scenes in Tunis, home side Esperance were declared winners of the CAF Champions League but it took a stoppage of one hour and 25 minutes before the match was abandoned, and they could claim the trophy.

CAF have called a meeting of their executive committee for Tuesday to discuss the incident, it said yesterday.