The best on parade at Comrades 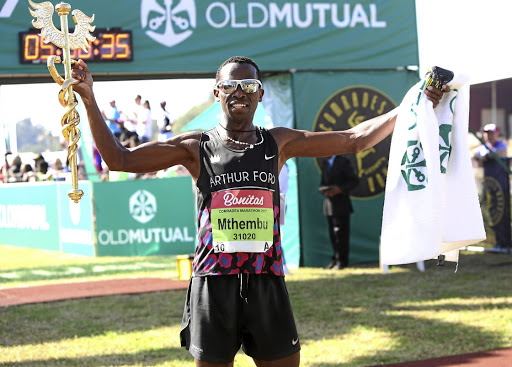 With exactly 13 days to go to the 94th Comrades Marathon on June 9, the Marathon Association (CMA) has confirmed the following top male contenders for this year's race.

Mthembu, pictured, will undoubtedly be the man to watch at the 2019 Comrades Marathon after his fabulous win at the Two Oceans last month. His flawless victory en-route to Durban last year saw him become the first athlete since the legendary Bruce Fordyce in 1988 to win back-to-back races.

The 34-year-old won a bronze medal at the IAU 100km World Championships in Croatia in October. He has another four gold medals to his name and will be on the hunt to become the first athlete since Stephen Muzhingi to win the race three times in a row.

The 38-year-old is eager to return to the winner's circle after romping to victory in the 2015 edition. Kelehe fancies the Up Run and will be looking to add to his haul of six gold medals. The hills of Dullstroom provide stern training test for Kelehe as he prepares for another crack at the title along with champion coach, John Hamlett.

David Gatebe managed to sneak into the top 10 last year with an eighth-place finish at the Moses Mabhida Stadium. He knows a win will add to his record-breaking achievements from 2016 and will further cement his status as a Comrades great.

The British athlete reached the podium last year, coming home third behind Joseph Mphuthi for his second gold medal. Way has two recent victories at the World 50km Championships and the Stockholm 100km under his belt. He will surely arrive in SA with his game face on.

Since winning his first gold medal back in 2015, Sello has established himself as a genuine top 10 contender. He won back-to-back golds in 2017 and last year and if all goes his way, he could be a possible contender for a lofty podium finish. He came second at the Lesotho High Altitude race in December, suggesting he will be ready to go the distance at the 2019 Comrades.

The 41-year-old stunned the field to finish as runner-up last year to bag his third gold medal and his best performance yet at the race. Mphuthi may be nearing the end of his running career but he will certainly savour an onslaught on the podium once again. He won the Sasol Marathon in February in a brisk time of 2:27.

It is seven years since Ludwick Mamabolo claimed his only Comrades victory. He has collected another four gold medals since, taking his tally to seven. Mamabolo finished fourth in the 2017 Up Run and he will be eager to add an Up Run title to his name.