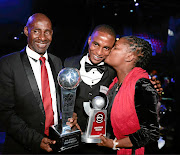 The league's goalkeeper of the season kept 14 clean sheets in 37 matches. "Every season, my goal is to play every minute and I achieved that this season, but I want to do that by lifting a trophy with my team," Williams reflected.

Mkhize led by example as the Citizens won the MTN8 and finished fourth in the league.

For his good showing this season, the Brazilian has been awarded the defender of the season accolade. Nascimento played 25 league games and scored four goals to help the Tshwane side retain their league crown. "It feels good to be recognised after such a long and difficult season," Nascimento told our sister publication, Sowetan.

"Magents" was key in marshalling the Buccaneers rearguard. Jele featured in 35 league and cup games in the domestic league.

The workhorse turned 34 on Thursday, but he's showing no signs of slowing down. Finally, he also got the nod this time for the PSL's midfielder of the season award after years of being nominated in various categories, but taking nothing home.

Lorch was recognised by peers and coaches for the Player's Player and Footballer of the Season gongs. In the league, the 25-year-old's numbers read; 13 goals and five assists in 32 matches. "I would like to thank our finishing coach (Stephane Adam) for taking his time and teaching us to score," Lorch said.

"Mshishi" was phenomenal for the Brazilians and was on top of his game more often than not.

The Zambian managed to reach double figures and finished the season as the top marksman with 16 goals. In fact, he scored 50% of Lidoda Duvha's league goals.

With 11 goals in 25 matches, the former Pirates striker was in fine form for the Clever Boys.

"Jingles" continues to give his counterparts a run for their money. The ex Bafana Bafana coach has been able to balance playing in Africa and still compete for honours in the domestic scene.