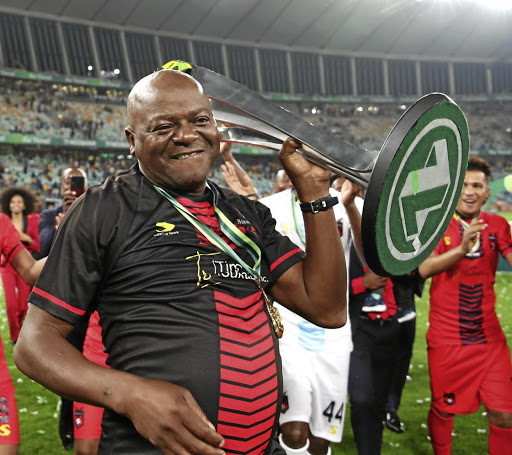 Dan Malesela is the man behind TS Galaxy - the team who gave Kaizer Chiefs a whipping last weekend.

The big deal is that Malesela is regarded as a magician.

He is trending for inspiring Galaxy, a mere 10-month old second tier outfit, with a group of unknown local players to the Nedbank Cup triumph, bagging a R7m cheque.

Malesela, who holds a Safa A Coaching Licence, has been in and out of the Absa Premiership over the years and coached Chippa United just before joining these unknowns.

Known as "Dan Dance" in football circles, he is adamant that winning the Nedbank Cup, especially with a lower division side, will finally earn him the respect he deserves.

"These are the fruits, and I'm hoping this is just the beginning of bigger things to come. I am positive that big teams will now give me a chance because at some point I had to stay at home jobless for six months," stated the debonair mentor.

Nevertheless, Malesela confirmed he hasn't received any job offers from elite league clubs, pledging his commitment to his NFD side Galaxy.

"No, there's nothing [meaning offers from big clubs] at the moment. I don't want to talk about the "what ifs".... my focus is on Galaxy, that's all. We are looking forward to playing in the CAF Confederation Cup, it'll be a wonderful experience for all of us."

While he conceded winning the Nedbank Cup with Galaxy is his proudest moment as a gaffer, Dance said captaining Orlando Pirates to the 1988 BobSave Super Bowl was his highlight as a player.

When not coaching, the placid mentor can be found roaming his farm near Klipvoor Dam in Brits, North West.

"I spend most of my leisure time at the farm... I find it easy to relax when I'm there."

He inherited the farm from his father. But there was disaster on the farm recently.

"We used to farm goats and chickens; all were stolen when I was in Port Elizabeth [coaching Chippa United last year].

But he has grand ideas of perhaps turning the property into a resort.

It's his possession-based brand of football that endeared Malesela to almost everyone who loves the beautiful game.

The Galaxy coach insists his philosophy is self- incepted.

A player exodus is looming at TS Galaxy and coach Dan ‘Dance’ Malesela admitted that he's powerless to stop approaches from top-flight clubs with ...
Sport
3 years ago

"I always want to be unique, my way of coaching isn't something I copied from Google or from any European coach. I appreciate the love people show me."

The father of four says family is important to him. His eldest son Katlego is living in Qatar, building his profile as a fashion designer. Other siblings are Boitumelo, Bokang and Thatego.

The trio and their mom Morin complete family life at their Montana home, Tshwane.

"When you are in football, you hardly get time to spend with your family. But I try to show them love. They even came down to support me in Durban against Chiefs," noted the
54-year-old.

The ever zestful Malesela couldn't close off the interview without cracking a joke.

"My wife is the one I'm close to the most because I met her first.... hahahaha."