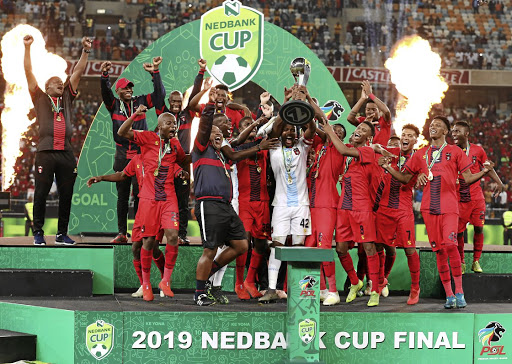 TS Galaxy celebrates by lifting their trophy following their victory over Kaizer Chiefs at their Nedbank Cup final encounter yesterday at Moses Mabhida Stadium in Durban. TS has become the first lower division side to win the tournament.
Image: Muzi Ntombela/ BackpagePix Football

What a disaster it was for Chiefs, who once again succumbed to pressure and extended their drought, which now stands at four years.

Well-respected Galaxy boss Dan Malesela has finally won a trophy as coach and has done it in superb fashion as the Rockets became the first lower division team to win the R7m cup.

Malesela has come back to haunt Chiefs after having won this cup as captain of Orlando Pirates some 20 years ago.

The hero for the Witbank-based side was striker Zakhele Lepasa, who won a penalty in injury time and converted it to shove a dagger in the hearts of the Naturena club.

The football gods smiled upon the NFD side, but frowned on the embattled Chiefs for their misdeeds after terminating the contracts of Pule Ekstein, Virgil Vries and Gustavo Paez, among others.

Club honcho Bobby Motaung should have first considered how this axing of players would affect team spirit and morale as players saw their mates humiliated weeks before the end of the season.

Football can be so cruel and it was merciless towards Amakhosi, who not only failed to finish in the top eight of the Absa Premiership, but crumbled on the big occasion.

For the entire week, Durban buzzed with anticipation with expectations high for the big game, but an underlying tension from the fans was always there.

'We will be crowned champions' - TS Galaxy midfielder

There was a lot riding on the Soweto club winning this final. But it was not to be.

Chiefs have become the butt of jokes from rival fans as they go through its worst dry spell in their nearly 50-year history.

The Tim Sukazi owned Galaxy by contrast surprised the local football fraternity by reaching a final in the first year of their establishment.

Galaxy played without any stress or the usual pressure because they had already superseded expectations by making it this far in the tournament.

For Chiefs that stress resulted in Teenage Hadebe conceding a penalty in the last minute by fouling Lepasa.

Chiefs coach Ernst Middendorp will now have to to pick up the pieces and prepare for next- season as the club will need to do some serious introspection during the off-season.