No rocket science in Sundowns' feat 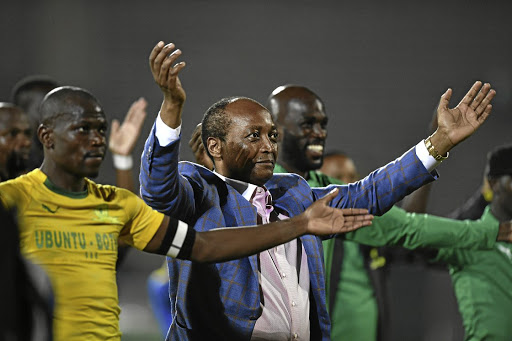 There are many lessons to pick up from Mamelodi Sundowns' success over recent years.

It's all there for everyone to see, but sometimes you would swear it's all rocket science.

Of course, there are those who believe that Sundowns' success is down to billionaire Patrice Motsepe's deep pockets.

The general argument is that the Brazilians can afford most of the quality players, leaving the rest of the teams to scramble for leftovers.

That's a weak argument, because Motsepe didn't only start his spending spree when coach Pitso Mosimane took over in 2012.

Even the likes of Angel Cappa from Argentina and the Bulgarian, Hristo Stoichkov, have been to Chloorkop and failed to deliver.

The bottom line is that even if Motsepe has gone on a big spending spree it doesn't necessarily mean he has bought success.

So, there is a lot that other PSL chairmen can learn from Motsepe, especially those that are trigger happy when it comes to their coaches.

Why Sundowns coach Pitso Mosimane voted for a Pirates player

Mamelodi Sundowns coach Pitso Mosimane went with an Orlando Pirates player for the Premier Soccer League’s Footballer of the Season award because ...
Sport
2 years ago

Motsepe may or may not have admitted this, but sticking with Mosimane and giving him the free reign to sign his preferred players has ensured stability at the club.

The PSL is a playground for club bosses that want to sign and impose their choice of players and expect the coaches to succeed using the players they probably didn't even want in the first place.

Strangely, the same bosses are quick to fire the coaches, who have little say regarding who comes in.

Motsepe learnt the hard way. He soon realised that he was going it the wrong way when he fired coach after coach - in Chippa Mpengesi fashion.

Now that Motsepe has seen the benefits of identifying the right coach and sticking with him, he wants Mosimane to become the Alex Ferguson of Sundowns and SA football.

Ferguson was with Manchester United for over two decades and initially, things weren't well for him at Old Trafford.

But once Ferguson got going, Man United enjoyed great success.

It's the same thing playing out at Sundowns, with four Absa Premiership titles in seven years since "Jingles" took over from Neeskens.

Not everyone is going to end up with their 'Alex Ferguson', but it's worth a try.