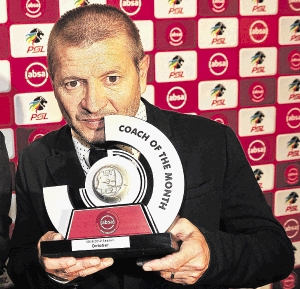 Polokwane City coach Jozef Vukusic was quick to deflect the attention from him when quizzed over whether he deserves to be nominated for the PSL coach of the season award.

Behind the scenes, the 54-year-old Slovakian has been hard at work and has led Rise and Shine to fifth spot with four matches remaining.

Vukusic, however, is not one to play to the gallery as he demonstrated during his interview with Sunday World.

"Ah, no, no, that is not a question for me," reacted Vukusic, who was named the PSL's coach of the month for October.

"The awards are good, but it's more for the supporters and the media to deal with that. I focus on my job."

But Vukusic's good job this season cannot be understated and it's understandable that he's not going to blow his own horn.

The numbers don't lie, though. Besides the fact that the Limpopo side is fifth on the standings, even more impressive is that they are just as good at home as they are away, so they don't only play well in their own backyard.

Mosimane says his skipper must win the award.
Sport
2 years ago

Vukusic, once again trying by all means not to make this about him, has attributed their good season to working with players with a "good mentality" at the club.

"I found a good squad here - a squad with a good mentality and character," continued Vukusic, who joined the club at the beginning of the season to replace Bernard Molekwa, who's now the team manager.

"I'm very happy as a coach that the players have improved individually and that the team has progressed.

"That is important. Of course we've worked on many issues, because in soccer you are never happy. You must work everyday and there's still space to improve."

Vukusic, who holds a Uefa Pro Licence, is delighted with the way his charges have asserted themselves in their games.

It wasn't a good start by any means with defeats to neighbours Black Leopards and Mamelodi Sundowns in their first two games.

Since then, however, some of Polokwane's big results have included beating Bidvest Wits and Kaizer Chiefs away, both by a 1-0 scoreline.

"We have found our style. We are organised in defence and we have a good transition in attack - our typical counter attacks, so we can score goals. Each player knows their role in the team and it has worked."