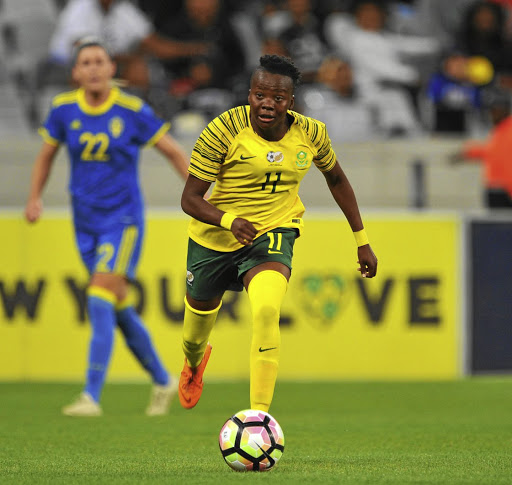 Banyana Banyana ace Thembi Kgatlana is raring to exhibit what she has learnt over the past few weeks at her new Chinese club, Beijing BG Phoenix.

In what will be her first match in the Banyana shirt since joining Phoenix two weeks ago, Kgatlana is expected to spearhead SA's attack in their World Cup farewell match against Jamaica at the majestic Moses Mabhida Stadium in Durban today (3pm).

"It's always amazing to come back home. I have learnt a few things in China and I am hoping to be able to display them against Jamaica, [a] few general things," said Kgatlana.

The reigning African Women's Footballer of the Year hopes today's clash against The Reggae Girls, who will also be making their World Cup debut in France from June 7 to July 7, will help them rediscover their rhythm after the disappointing Cyprus Cup last month.

"This match will bring back our good mood after our performance in Cyprus. We are looking forward to getting a win," Kgatlana said.

In Cyprus, Banyana failed to win any of their four games, with three defeats against Czech Republic, Korea DPR and Finland, who they drew against in the group stages before losing to them in the ninth-place play-off.

On the other hand, while emphasising the significance of the fixture as they build up to their first-ever international showpiece, Jamaica captain Konya Plummer conceded their knowledge of Banyana was sketchy.

"Every game is important, but this one is very special for us because it's a preparatory match closer to the World Cup. We don't know much about South Africa. We are going to a game where we are not aware of what to expect," she said.

However, the Caribbean nation's skipper vowed they'll put in a solid fight, revealing they have been enjoying their stay in the country. "Everything in SA has been great. The environment in general is great for us, we're happy to be here and happy to compete, we'll fight hard on match day."

In the World Cup, SA are drawn against China, Germany and Spain. They open their campaign on the second day against Spain. Jamaica are ranked 53rd in Fifa rankings, three spots below Banyana.