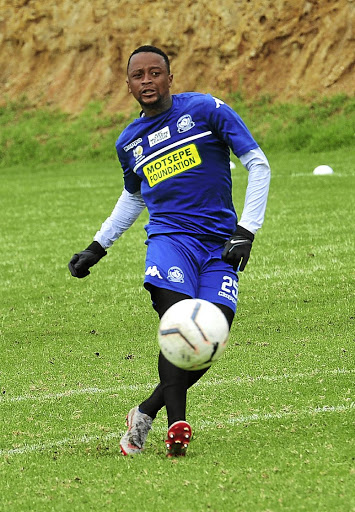 Lucky Khune is first renowned as Kaizer Chiefs and Bafana Bafana goalkeeper Itumeleng Khune's brother before being known as his own man.

However, Lucky is still determined to step out of his elder brother's shadow and create his own legacy in the beautiful game.

The younger Khune has been in blistering form for ABC Motsepe League side Baberwa, netting four goals in the club's past six games as they push for promotion to the National First Division (NFD).

"When I retire, I want to be remembered for my own contributions not that I was just Itu's [Itumeleng] younger brother. I am positive that I can still offer a lot in football," said the bubbly Lucky.

"At 29, I can still move back to the Premiership and bang in those goals. I believe in my God-given talent. But the priority is to go up with Baberwa."

The lad from Ventersdorp, North West, is proud of what his sibling, Itumeleng, has accomplished in football, but insists they are not competing and he feels no pressure to emulate him.

"There's no pressure at all. I am happy for my brother that he's doing very well, but I am running my own race. The only person I compete with is myself," noted the younger Khune.

While at Chiefs his strike, which sank nemesis Orlando Pirates in the Telkom Charity Cup back in 2010, rose expectations that Lucky was going to be one of the country's top strikers. But two years later, he was clubless, before joining Chippa United in 2014.

"Things were happening fast for me. I think it was not meant to be for me to have a successful spell at Chiefs. I will forever be grateful for the opportunity to don that famous gold and black jersey. It was a worthwhile experience," the Baberwa striker reflected.