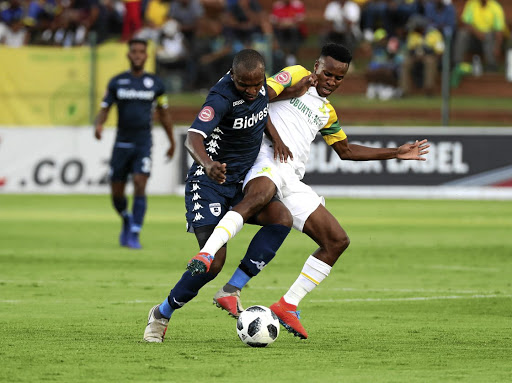 Themba Zwane of Sundowns is tackled by Gift Motupa of Wits during their league match at Bidvest Stadium, last night. /Gavin Barker/BackpagePix

This Absa Premiership top of the table clash had almost all the ingredients; the goals, tough tackles and tough calls from referee Victor Hlungwani.

There were also fans who tried to force their way into the stadium before the match started, but the situation was contained by security guards.

Phakamani Mahlambi put the Brazilians ahead against his former side, but Gift Motupa brought the Students level with a chip over Denis Onyango, all within the first stanza.

When the two sides drew 1-1 in the first round at Lucas Moripe Stadium in October, Sundowns played Arendse despite the fact that he wasn't named in the original 18-man squad, which is in contravention of the rules.

The PSL's disciplinary committee is now handling the matter, which could see the Tshwane side docked points and Wits possibly benefitting.

In yesterday's encounter, Arendse - who was much in the headlines in the build-up to this epic clash - was given his marching orders just before the interval. He committed a professional foul on Fargrie Lakay, who could have been goal-bound, on the edge of the box.

If Wits win the title, the two incidents could be a big talking point at the end of the season.

In the second half, the goal scorers Mahlambi and Motupa were booked for diving.

Playing with ten men, Sundowns resorted to parking the proverbial bus to salvage a point, and Wits rarely had chances, with only Sifiso Hlanti hitting the side netting in the 72nd minute.

Onyango was replaced by Reyaad Pieterse due to injury with 15 minutes to go.

As it is, Downs coach Pitso Mosimane, with two matches in hand, would be pleased to bag a point and remain two points behind the Clever Boys.

Sundowns host the tough-as-nails Cape Town City on Wednesday, while Wits wait for the Citizens on Saturday.