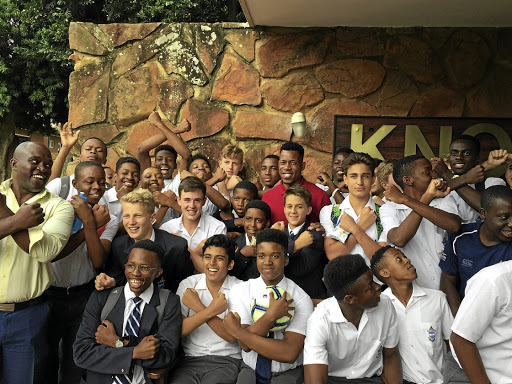 The role of Orlando Pirates captain Happy Jele extends beyond the fields of the Buccaneers.

Affectionately known as "Magents", Jele is the longest-serving Pirates player in the current squad, having signed in 2006 from amateur side Walter Stars, from Middelburg in Mpumalanga.

Jele's defensive and leadership skills are noticeable on the field, but he brings more to the club.

Although not feeling well on the day, Jele joked around with the kids, especially those who support Pirates' rivals Kaizer Chiefs, saying they should cross the floor.

Molekwane credits his wife for solid life
Sport
2 years ago

The school's headmaster, David Mokhari, was pleasantly surprised to see Jele in the area.

"I didn't expect to see him at all. I'm very happy," said an elated Mokhari, who's a big fan of the late Bucs striker, Lesley Manyathela.

Jele, together with his vehicle sponsor, Lexus Centurion, had arranged for a surprise jersey handover after Mokhari purchased a car from the dealership.

After discovering Mokhari's love for the Bucs and Manyathela, they decided on the number 122 which "Slow Poison" wore before his death in a car crash in August 2003.

"Fan interaction is very important for the club and I'm happy to play this role," Jele said.

During the visit, Jele also made time for the school's cooking staff behind the scenes.

Usually one to keep to himself, Jele appeared to have enjoyed the experience outside the field of play.