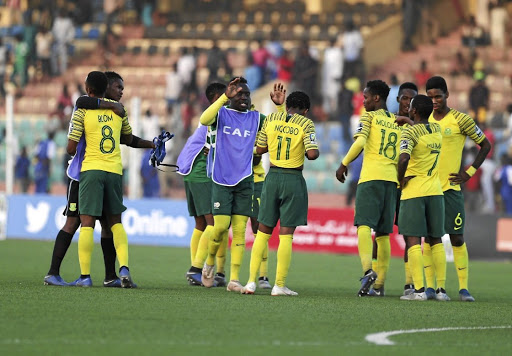 Amajita players celebrate after qualifying for the World Cup to be hosted by Poland in May.
Image: BackpagePix

Firstly, congratulations are in order after the national Under-20 team, Amajita, qualified for their second successive World Cup to be hosted by Poland in May. The draw is being held today.

Their World Cup feat plus the victory over their nemesis Nigeria to finish third in the Under-20 Africa Cup of Nations (Afcon), sent the entire country into a state of jubilation a week ago.

In the midst of the ecstasy that swept across our country, there were those who doubted whether the future Bafana Bafana would go all the way to the final and win the tournament.

And in the exchange of the arguments that ensued, in comes the South African Football Association (Safa).

The football leaders at Nasrec should leave no stone unturned in ensuring that Amajita are well-prepared for their World Cup campaign. It is their second stint in a row after playing at the World Cup in South Korea two years ago.

There is no reason for Safa to drop the ball; the national soccer body must ensure they give the lads every support, financially and otherwise, not excluding the technical preparations in order to turn them into conquerors.

Even former Bafana Bafana and Under-23 mentor Shakes Mashaba has openly come out in support of Amajita, professing his trust in the team to make the country proud on the world stage.

If I were to be asked to rate Amajita's prospects of going all the way to reaching the final, I would say they would pass with flying colours. There is no doubt they are a great bunch of young talented players, but confidence must be instilled in them that they become world-beaters.

I marvelled watching every game they played during the Afcon and listening to the coach explaining how they painstakingly planned for every match.

They were on numerous instances found wanting in their shooting for goals and the goal-getting stakes in particular, but with proper fine-tuning, coupled with the cherry-on-top - the return of players such as forward Lyle Foster for the World Cup, any team in their group is there for the taking.

The players showed sparks of great levels of maturity and most are likely to become household names as Bafana players in the next year or so.

Amajita coach Thabo Senong has often complained about the lack of international experience and playing competitive friendly matches in the lead up to tournaments like the World Cup. That must be rectified.

To book their place in Poland, Senong's charges beat Burundi 1-0 in their last group stage match of the Afcon, having drawn their first two games against hosts Niger and Nigeria, but lost to Senegal 1-0 in the semifinals, then went on to beat Nigeria on penalties for their first ever bronze medal finish.

This eight-nation continental tournament also doubles up as Under-20 World Cup qualification tournament, where only the top four national teams earn a berth at the World Cup.

Before the back-to-back qualification, Amajita also booked a place in the World Cup finals in Malaysia in 1997 and Egypt in 2009.

Safa president Danny Jordaan, has called them "warriors on the field of play", but many sceptics don't believe Amajita can go all the way to reach the final match.

However it is up to players such as striker Foster, defenders Keenan Phillips, Happy Mashiane, Fezile Gcaba and midfielder Khanya Leshabela, among others, to rise to the occasion and go all the way, with Safa's unequivocal backing of course.