Grooming is key to boxing 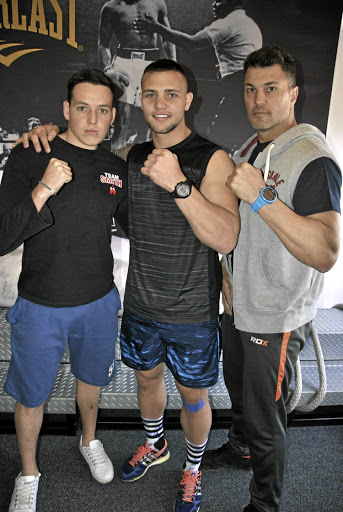 Rowan Campbell, left, Kevin Lerena, and trainer Peter Smith who has made them champions despite the fact that they have no amateur background.
Image: Jeff Ellis

Does the amateur background really determines the future of an aspirant boxer?

That million-dollar question has torn the boxing fraternity apart, with some insisting it is a must for any wannabe boxer to spend quality time in the amateur ranks, where they will not only learn about the sport of boxing, but will eventually get the idea of whether they are cut out for it.

Others say it is not cast in stone because some boxers with no amateur experience have gone on to win titles.

A typical example is Kevin Lerena who had no amateur fights but already holds the IBO cruiserweight belt.

He has previously held the SA and a number of marginal regional titles. He is now recognised globally as one of the leading cruiserweights in the world.

Former heavyweight top boxing contender and now top trainer Peter "Sniper" Smith, who is in charge of Lerena's blossoming career, said: "Amateur background is important but only if a fighter is well-groomed. It is about establishing that foundation. Even if you come from the amateurs, it does not mean you will be a good pro. I've been around the world as a fighter and I have seen it all. It is about being well-groomed."

Rowan Campbell has no amateur background but Smith has already guided him to winning the SA super middleweight belt in only seven fights. Campbell will oppose Congolese Alex Kabangu for the IBO Africa super middleweight title in the Golden Gloves tournament at Emperors Palace on February 24.

"Rowan had three amateur fights and I could see that he was not being well-groomed. I started grooming him and in no time he is the SA champion.

"I am not blowing my own horn but [I'm] giving you my opinion. Now he is well-groomed and coachable. That is the importance of proper grooming even when you don't have an amateur background."

Top promoter believes in boxer
Sport
2 years ago
Next Article