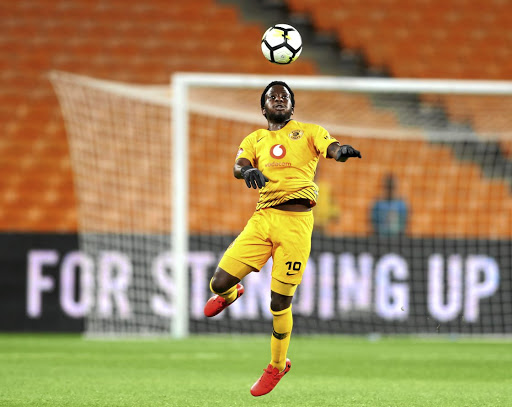 It will benefit players like Siphelele Ntshangase and Chiefs faithful fans to play home games at an intimate venue like Orlando Stadium, where fans will attend in big numbers.
Image: Samuel Shivambu/BackpagePix

The burning issue of PSL clubs not owning their home grounds has reared its ugly head again after Kaizer Chiefs announced they were moving their league game against Highlands Park to Durban next month.

The game was initially scheduled for their home ground, the FNB Stadium, but since the venue change their opponents, the Lions of the North, will now have to make a trip to the Moses Mabhida Stadium for the March 2 fixture.

The club announced the change after receiving the go-ahead from the PSL.

"Please note that we will now play Highlands Park at Moses Mabhida Stadium and no longer FNB Stadium," said the statement posted on the club's Twitter account.

A number of reasons have been forthcoming from numerous stakeholders, including Stadium Management, which has a contract with Amakhosi to host 12 out of their 15 home games at the venue. Jacques Grobbler cited contractual obligations as the reason for the move and said they cannot decide at the beginning of the season which three out of the 15 home matches will not be staged at Soccer City.

He pointed out that the match against Highlands Park was one of the three games identified for outside Gauteng.

But in essence Chiefs have already passed that quota of three matches and this would be their fourth home match to be played away, including the two they played at Moses Mabhida Stadium after the PSL slapped them with a two-match empty stands sanction for their fans' violent behaviour at the same venue last year.

Fact is the Soweto Glamour Boys have had dismal attendances at Soccer City, especially for their mid-week games in the past few seasons. Consequently the Soccer City contract needs to be revisited.

Chiefs is not getting value for money for being tenants at Soccer City. As a result the contract is really not worth the paper it is written on as far as gate-takings revenue is concerned.

Chiefs' last league match before the big derby saw a crowd of less than 2,000 people on the stands. A match they lost 1-0 to Cape Town City through a late winner.

The match was played on a Wednesday night - people were coming from work and going to work the next day.

Chiefs have to seriously consider playing their midweek matches at a smaller venue like Orlando Stadium, a walking distance for many fans. I used to walk from Diepkloof myself.

The mega Soccer City is too humongous for midweek games because numbers are dwindling.

The Amakhosi head honchos, Kaizer Motaung and Co must, as a matter of urgency, revisit the Stadium Management contract going forward. Soccer City is too big for miniscule attendances, even Bafana Bafana cannot fill it nowadays.

The cumbersome logistics of organising and preparing the venue, including securing security personnel, defeats the purpose because there are no fans to police.

Many others believe the change to Durban was effected as a result of the awful record Chiefs have at Soccer City.

As football buddies, Motaung and Pirates boss Irvin Khoza could enter into a gentlemen's agreement for both clubs to use Orlando Stadium as their home ground. I don't think the sky would fall.

Orlando Stadium is historically known as the venue many battles between the two Soweto giants were previously fought - and won or lost.