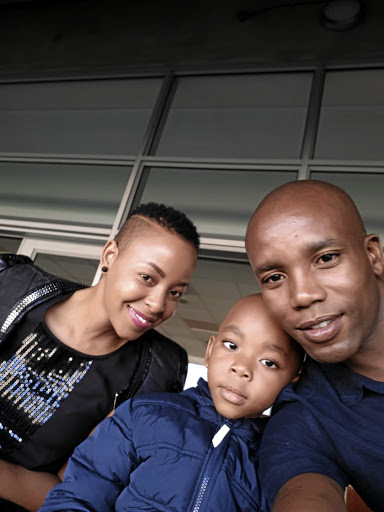 Tlou Molekwane and his wife, Elsie, with their son Bokang.

Ex-Kaizer Chiefs defender Tlou Molekwane may have played for numerous clubs in the past, but away from the beautiful game, there's been no such gallivanting for the Seshego-born right-back.

This is because Molekwane has been with his wife, Elsie, for more than a decade. The couple grew up in the same township in Seshego and eventually tied the knot in 2015. They have a five-year-old son, Bokang.

"My wife and my son are very special to me. Elsie and I grew up together. We come from the same street in the township of Seshego in Polokwane in Limpopo," Molekwane said.

"I moved to Joburg in 2004. I left her in Limpopo, but the following year she came to study in Vaal. We got married in 2015. We've been together for more than a decade.

Molekwane, now playing for Baberwa in the ABC Motsepe League, says being committed to one woman has helped him tremendously, he would have gone broke long ago if it was not for their longstanding relationship.

"She has always been there for me, advising me what to do and what not to do. Many footballers have blown their money on slay queens . I am happy that I settled with one woman long ago. If it was not for her, I would have gone broke by now, hopping around the nightclubs with all the girls," said the Baberwa player.

To show his humble lifestyle, the former Bloemfontein Celtic and Polokwane City defender is still driving a BMW 1 series 130i he bought seven years ago while still at Chiefs.

Molekwane, 30, is also grateful to Amakhosi legends Gerald Sibeko and Ace Khuse for always guiding him and giving him tips to save money.

"The reason I was able to save money is because of the people I hang around with . the advice from people like Sibeko and coach Khuse. I worked with them for a very long time, I was brought up there at Chiefs," Molekwane said.