Gatvol Baxter ready to step down 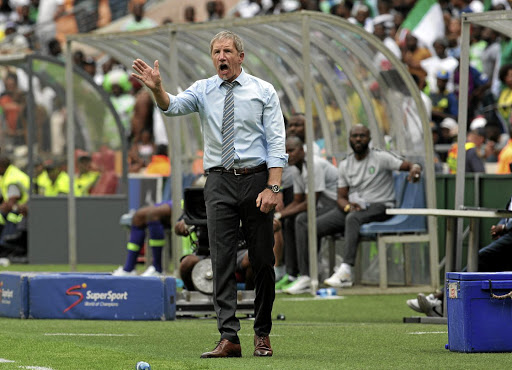 Bafana Bafana could have a new coach even if the national team qualifies for the Africa Cup of Nations (Afcon) to be hosted by Egypt mid-year.

Coach Stuart Baxter came out guns blazing and blunt during a media briefing this week about the prospects of him quitting his job, citing various reasons that led to him concluding it was time to go.

Compounding Baxter's situation further is the PSL's refusal to postpone all league fixtures during the week leading up to the vital match.

In their last Afcon qualifying match in Group E next month, Bafana have to either beat or draw with Libya for them to book a berth in the continental football extravaganza.

Bafana are second with nine points in Group E, a point behind Nigeria who have already qualified. Baxter wanted more time with the local-based players ahead of the crucial match to be played in Tunisia, on the weekend of March 22-24, because of the adverse security situation in Libya.

Baxter, who made a return for his second stint with Bafana in May 2017, seemed to be a man gatvol when he spoke about his future as the senior national team's tactician.

Looking like a man cornered and about to surrender, the outspoken and forthright Baxter put it on record that it would not cost Safa a dime, if the association was to release him tomorrow. His contract runs until the end of the World Cup in Qatar in 2022.

The Briton said if Bafana do not qualify, he would certainly tell Safa to ascertain whether they still want him to carry on because he was ready to "walk" if that's what Safa wants.

For the first time, Baxter disclosed that he stepped down empty-handed when he was fired in 2005, after failing to take the national team to the Germany World Cup the following year - 2006.

At the time of his departure, he said he did not get a cent from Safa, instead he told the national football controlling body to give the money to charity. Then Baxter struck the final blow when he told all and sundry that even if Bafana qualify by getting the desired result against Libya he "can't do the job here" as football was not moving forward in the pace he wanted.

"Because of certain things... I just can't do it, I will also walk. Even if they want me to stay."

It is crystal clear that Baxter is an irked man. He is fed-up with how football is run in the country. To top it all, he spoke of people in football having agendas, more so regarding the postponement of the PSL fixtures.

There is a cold war between Safa and the PSL. The two parties often do not see eye-to-eye on a number of issues.

Last year it was the Safa referees' sponsored Outsurance branded uniform the referees were obliged to wear during league matches, to the chagrin of the PSL.

The PSL had initially agreed in principle to shelve all fixtures ahead of the vital qualifier against Libya to give Baxter more time to prepare.

The main matches affected are from March 17 to 22, involving Bidvest Wits, Cape Town City, Kaizer Chiefs and SuperSport United, clubs from which the bulk of the local-based players come from.

Making the situation further untenable is the fact that Baxter will be unable to get the overseas-based players early because the match does not fall on a Fifa date.

Baxter said he takes full responsibility for Bafana's failure to qualify for the World Cup in Russia last year, but players must also shoulder the blame.

The Bafana head coach tried to be diplomatic, saying he was grateful to the PSL for partially agreeing to accommodate the national team, as he will get two days instead of one preparing Bafana. Evidently, relations between Safa and Baxter are at an all-time low, judging by his eagerness to call it quits.