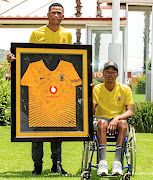 Several South African paraplegic and wheelchair-bound athletes have come out in support of Kaizer Chiefs player Wiseman Meyiwa after it was announced this week he was paralysed from the spine down.

Meyiwa, 19, sustained spinal injuries in a car accident in November when he was traveling home to Pietermaritzburg, KwaZulu-Natal from Joburg.

The player, who only had a four-year stint at the club, has been undergoing rehabilitation at Milpark Hospital.

Motaung said Meyiwa was discharged this week but will still have a role to play at Chiefs. He joined the club as a development player in 2014, aged 14.