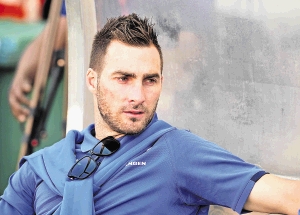 Amid their alarming inconsistency, SuperSport United coach Kaitano Tembo is optimistic he'll see out his two-year contract at the club.

Having been serving as an interim coach for nearly seven months, Tembo eventually took the reigns on a full-time basis last August. Just five months into his two-year deal, the Zimbabwean-born tactician concedes he feels the pressure, but is confident he'll finish his contract.

"There's always been pressure from day one because I am a new coach. So I am always going to be under pressure. But that's part of my development, it's a learning curve because when you are coaching a team like SuperSport you are always required to deliver, irrespective of the circumstances," Tembo said.

The SuperSport mentor, a defender for the same club in his heyday, has won nine of the 23 matches he has overseen as a full-time tactician, with eight defeats and six draws. "I am very confident that I will stay beyond my contract. What's important is how I am managing the players. The players seem happy to work with me."

SuperSport have won only one of their last five fixtures, with three losses and a draw. Coming from two back-to-back defeats to Cape Town City and Black Leopards respectively, the Tshwane side hosts high-riding Bloemfontein Celtic at Lucas Moripe Stadium today (3.30pm).

Tembo feels their undoing this season has been their bluntness in front of goals. Matsatsantsa have scored a mere 15 goals in 17 games.

The 48-year-old coach was positive that the return of Bradley Grobler from injury will boost Matsatsantsa-a-Pitori upfront.