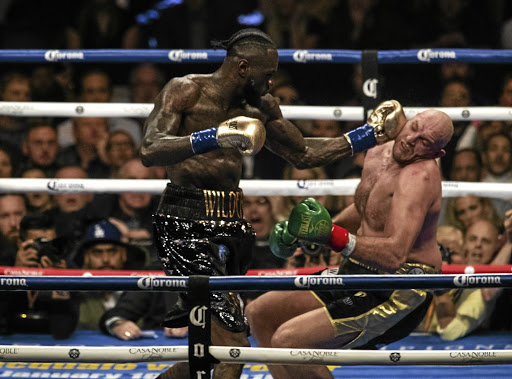 Deontay Wilder lands a left hook and knocks down Tyson Fury in the 12th round of their WBC title bout.
Image: Philip Pacheco/Getty Images

International boxing hall of famer Stan Christodoulou says he was not chuffed by the manner in which referee Jack Reiss conducted himself in the WBC heavyweight championship between American Deontay Wilder and UK challenger Tyson Fury in Los Angeles two weeks go.

This was especially when Fury was on his backside after being decked for the second time by champion Wilder.

"The faces in the big crowd glooming, mouths agape, eyes burning with mad glee, Fury was the only figure in the house that was not moving.

"He stared at the ceiling as if something fearful was there," said one reporter.

It is said that nine out of 10 referees would have stopped the fight then and there. But Reiss, from California, did not. Instead, he gave, it is claimed, a "very slow" count to give the "Gypsy King" from the UK more time to recover.

Fury, who had been down before, eventually got up and continued fighting in a bout declared a split draw.

However, new behind-the-scenes footage from Fury's dressing room explains why the fight was not called off as soon as the he hit the deck.

Reiss spoke to the Brit before the main event to ensure the smooth-running of the fight.

And, in footage released by BT Sports, the American can be seen telling Fury, 30, he would protect him as long as he was aware what was going on around him.

He told him: "The last thing I want to tell you is this: I really don't care who wins this fight, but I care about Tyson Fury."

Speaking on BBC Radio 5 live's boxing podcast, analyst Steve Bunce said: "My gut feeling is it looked to me like Fury started to get up at eight. Was he up at 10? That will be debated. It would have been venomously debated if he (Fury) had walked away with the win and the agenda would be it was a long count."

Christodoulou, who officiated in boxing's 17 weight divisions during world title fights in more than 40 countries, said: "I was not too impressed by the manner in which the referee handled the knockdown, especially the second one.

"He seemed to have taken too long before he began counting for Fury. He gave him extra time to recover.

"I did not score the fight and normally I score fights when I watch them. But still I thought Wilder won the fight. Yes, it was close but remember ... there were two knockdowns and that is four points less for Tyson."

There are calls that Reiss be booted out of the sport.

But he has denied his count was slow and said he just wanted the "best for boxing".