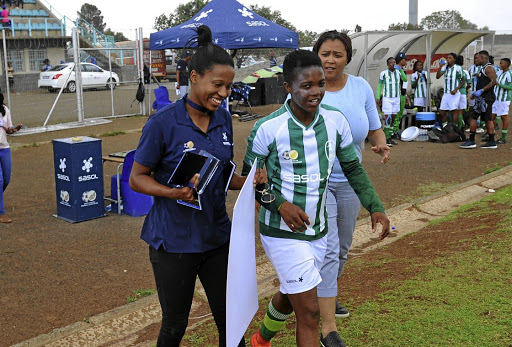 Banyana Banyana workhorse Jermaine Seoposenwe takes pride in how she managed to shrug off possibilities of falling into social ills when growing up in the Cape Flats, where she also once had a gun pointed at her.

Synonymous with crime and gangsterism, among other malaise, the Cape Flats is one of the largest so-called coloured areas in Cape Town.

"I'm proud and happy that I didn't fall into drugs, alcohol (and) I think God protected me. My father is a pastor so I come from a spiritual family," said an ever-enthusiastic Seoposenwe.

"There were times when I got into situations where I could have lost my life. I once had a gun pulled on me. That was pretty scary. My friend and I went to her guy friend's party and that gun incident happened. God covered me."

Seoposenwe, 25, continued: "I never felt threatened, gangsters knew who I was. My friends have fallen into drugs and gangsterism but I still greet and speak to them. They introduced me to the game. When I go home I talk to them. I am not a fan of the life they live but they're still my friends," noted the Banyana attacker.

Banyana's Pikinini the next big thing

Arguably one of the most successful women footballers in SA, Seoposenwe has also begun building her career off the field of play. The Capetonian holds a business studies qualification from Samford University in the US.

"At the moment I'm in a Limitless internship programme. It's a programme that Safa and [partners] Sasol created working with marketing agency Levergy. It's a year-long programme," said Seoposenwe.

"Returning home from the US I felt like this was a good opportunity to focus on my career. I am planning to do my MBA degree because I want to safeguard my future."

Seoposenwe was instrumental in propelling Banyana to their maiden Fifa World Cup qualification when they finished as runners-up in the Africa Women's Cup of Nations that concluded in Ghana last week.

The Banyana dynamo is a cult hero at Samford University. Last year she was named the Southern Conference (SoCon) Player of the Year for a second straight year. She also became Samford Soccer's all-time leading scorer with 35 goals. She's currently on the books of Gauteng club JVW after returning home in January.