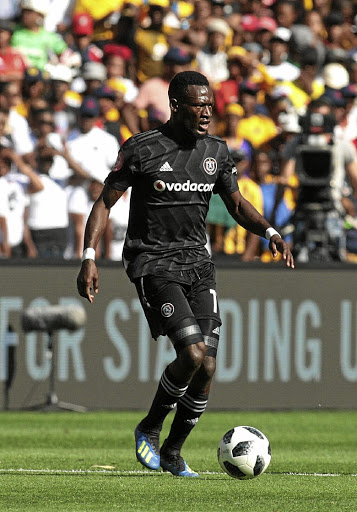 Justin Shonga believes he and Augustine Mulenga can become the most feared strike partnership in the Premier Soccer League.

Both Pirates' Zambians - already lethal in green for their national team, and after some early teething problems, increasingly so in black and white - were on the scoresheet again as Bucs beat Light Stars 5-1 on their return to the CAF Champions League on Wednesday.

The goals against the team from Seychelles in the preliminary round, first leg fixture at Orlando Stadium carried the hallmarks of the two strikers - one, Mulenga, a big, fast bulldozer in the area; the other, Shonga, clever around the edges of the box.

Bullish Mulenga scored Pirates' second goal, steaming through and finishing past goalkeeper Romeo Barra in the 38th minute. Shonga came off the bench and smashed in a trademark free-kick for Bucs' fourth in the 92nd.

The duo have the potential to be one of the best strike partnerships ever seen in the PSL.

"I think it's been maybe two years now that we've been playing together at the national team," Shonga said.

Baroka's road to the TKO final should be warning to Bucs

"So I know his movements. For now I'm getting better and better at playing alongside him and knowing him.

"We are always together. We talk about football all the time. Sometimes, when we watch the videos of games we've played I will even tell him to do this or that.

" We will strategise, say that 'I was in this position, you passed to me, and so on'.

"That is helping me so much. And I always look out for him when we're on the field, along with [Thembinkosi] Lorch and [Thabiso] Kutumela.

"But it looks like it's a brother thing - that's what I would say."

The teething problems in the partnership have mostly come from Shonga, who at the start of the season was guilty of missing some sitters, but increasingly has grown more assured in front of goal.

The Zambian, though, has made set-pieces his hallmark, and scored another stunner against Light Stars.