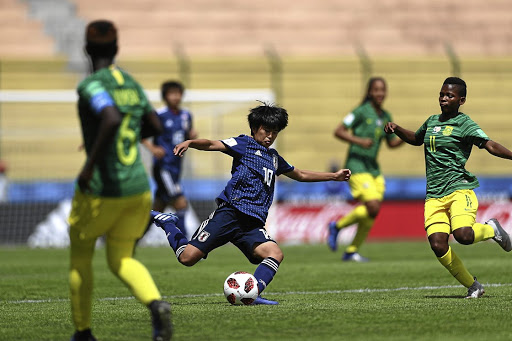 Momo Nakao of Japan in action against South Africa in the 2018 Fifa U-17 Women's World Cup match played in Maldonado on Friday. Japan won the Group B tie 6-0.
Image: Ronald Martinez/ Getty Images

South Africa Under-17 women's team coach Simphiwe Dludlu admitted that they lost to a better side after their 6-0 humiliation by Japan on Friday in their second match of the Fifa U17 World Cup in Uruguay.

The result leaves Bantwana on the brink of elimination from the tournament as they have only one point from two matches and have to face the equally desperate Brazil on Tuesday. "The jitters of the first game were gone but we lost because we played against a team that is better than us technically," Dludlu admitted after the humbling.

"It was a better game to play, I know it sounds a bit crazy because we lost 6-0, but the girls had better confidence than the first game. It was a good game to watch also and it tells us about the gap between the two teams with regards to philosophy and development," said Dludlu.

"I can safely say our girls have learned lessons from this. We had our good moments here and there during the game and if we were clinical we could have converted one or two of our chances."

After such a sizeable defeat, Dludlu has a huge task on her hands to motivate the players for the clash against Brazil next week. Like, Bantwana, with just a point Brazil are desperate for a win to stand a chance of progressing.