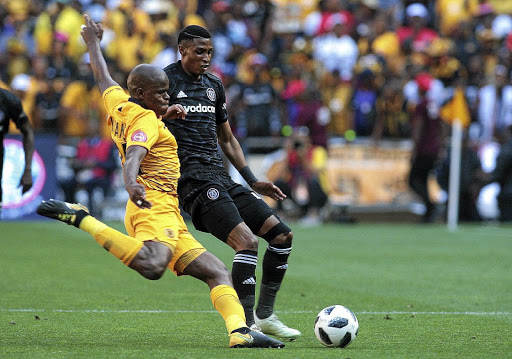 Katsande, 32, is no stranger to situations like this, and as Chiefs seek to recover from their 2-1 loss to Orlando Pirates last weekend, he has reason to be optimistic.

When he joined Chiefs from Ajax Cape Town in 2011, the Zimbabwean international was immediately thrown into the deep end in the MTN8 final against Pirates, who won 1-0 at FNB Stadium.

Katsande, who had come in as a substitute in that clash, was heavily criticised.

It's with this experience that Katsande is convinced that Chiefs, as a whole, have what it takes to dust themselves off and face SuperSport United at Moses Mabhida Stadium on Sunday [3pm] with renewed vigour. Amakhosi and Matsatsantsa meet in the Telkom Knockout quarterfinals.

Katsande said he always shares with fellow players the painful lesson of losing, and that after every loss they have to pick themselves up for the next assignment.

Kaizer Chiefs midfield kingpin Willard Katsande has urged his teammates to put the pain of losing to Orlando Pirates behind them and focus on ...
Sport
3 years ago

"The first time is always difficult, and I always share with them that it wasn't easy for me. After the match [in 2011], there was a lot of criticism that I was the wrong signing.

"But at the end of the day it would build your character and help you stay in the game, but if you listen more to negative comments you would be gone for good.

"If you listen to your teammates, they are going to help you. It's already water under the bridge and you can improve tomorrow.

"By so doing, you keep on working and as long as your teammates are standing by your side, that's the most important thing," Katsande said.

SuperSport, meanwhile, will be missing their own strongman and captain Dean Furman, who won't play again this year because of injury.

But in central midfield, the Tshwane side has former Chiefs player Reneilwe Letsholonyane, whose attacking abilities could pose problems for Katsande and company.

United will also be missing striker Bradley Grobler because of injury, while Amakhosi will still be without the likes of Lebogang Manyama and Joseph Molangoane.